Great Smoky Mountains National Park officials invite the public to comment on a proposed project through December 10, 2017. The National Park Service is proposing to upgrade the Elkmont Wastewater Treatment Plant. The plant serves the Elkmont Developed Area including the Elkmont Campground.

Treated effluent from the plant is currently discharged to the Little River downstream of the campground as authorized by National Pollutant Discharge Elimination System permit number TN0022349 issued by the Tennessee Department of Environment and Conservation. The plant operates seasonally for about nine months from March through November based on the campground schedule. The effluent consistently complies with all permit limitations.

The purpose of the proposed action is to provide a modern, efficient, and sustainable wastewater treatment system for the Elkmont Developed Area, ensure continued permit compliance, and maintain or enhance water quality in the Little River. The action is needed because the existing treatment plant, which was originally built in 1959 and modified in 1969 and 2008, has exceeded its expected service life.

The park is currently evaluating alternative approaches for treating wastewater at the Elkmont Developed Area and is identifying issues that should be considered during the National Environmental Policy Act and National Historic Preservation Act compliance processes. The public is encouraged to participate by providing input on important issues that should be considered and alternative ways of achieving the project objectives. Park staff invite the public to comment on the proposed project using the National Park Service’s Planning, Environment, and Public Comment website and following the link titled “Elkmont Wastewater Treatment Plant Upgrade” at https://parkplanning.nps.gov/grsm or by mail to Great Smoky Mountains National Park, ATTN: Environmental Planning and Compliance, 107 Park Headquarters Road, Gatlinburg, TN 37738.

The National Park Service has extended the public comment periods for the proposed peak-season entrance fees at 17 national parks and revised fees for road-based commercial tours and will accept comments until December 22, 2017. If implemented, the increased fees would generate needed revenue for improvements to the aging infrastructure of national parks.

The deadlines, originally scheduled for November 23, have been extended to accommodate interest in this issue from members of Congress and the public. Already, more than 65,000 comments have been received on the proposals. 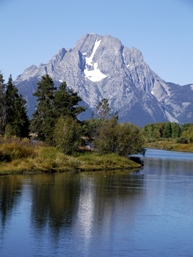 Under the proposal, peak-season entrance fees would be established at 17 highly visited national parks. The peak season for each park would include its busiest contiguous five-month period of visitation. The peak season entrance fee for a seven-day pass to each park would be $70 per private, non-commercial vehicle, $50 per motorcycle, and $30 per person on bike or foot. A park-specific annual pass for any of the 17 parks would be available for $75.

The cost of the annual America the Beautiful- The National Parks and Federal Recreational Lands Pass, which provides entrance to all federal lands, including all national parks for a one-year period, would remain $80. Entrance fees are not charged to visitors under 16 years of age or holders of Senior, Military, Access, Volunteer, or Every Kid in a Park (EKIP) passes. The majority of national parks will remain free to enter; only 118 of 417 parks have an entrance fee.

Fees have long been an important source of revenue used to improve the visitor experience and recreation opportunities in national parks and on other federal lands. Estimates suggest that the peak season price structure could increase national park revenue by $70 million per year. The funds would be used to improve roads, bridges, campgrounds, waterlines, bathrooms, and other amenities which enhance the visitor experience. Under the Federal Lands Recreation Enhancement Act, 80% of entrance fees remain in the park where they are collected. The other 20% of the revenue is distributed to other national parks.

The public comment period for proposed entry and permit fee adjustments for commercial tour operators has also been extended until December 22. The proposal would increase entry fees for commercial operators and standardize commercial use authorization (CUA) requirements for road-based commercial tours, including application and management fees. All CUA fees stay within the collecting park and would fund rehabilitation projects for buildings, facilities, parking lots, roads, and wayside exhibits that would enhance the visitor experience. The fees will also cover the administrative costs of receiving, reviewing, and processing CUA applications and required reports.

The proposal also includes a peak-season commercial entry fee structure for the 17 national parks referenced above. All proposed fee adjustments for commercial operators would go into effect following an implementation window.

Great Smoky Mountains National Park officials announced that the Clingmans Dome Observation Tower has been reopened to the public. The rehabilitation work has been suspended for the winter and is expected to resume this Spring. The remaining work is expected to take approximately two weeks and will necessitate another short-term closure to complete. 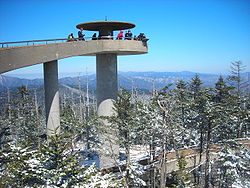 Much of the needed rehabilitation work was completed this Fall, but the final surface overlay still needs to be completed. Deteriorated areas on the concrete columns and walls have been repaired, support walls have been stabilized at the base of the ramp, and stone masonry has been repaired.

Straddling the North Carolina and Tennessee state line at 6,643 feet, the tower is a prominent landmark and destination as the highest point in the park. The observation tower is a precedent-setting design of the National Park Service’s Mission 66 program, which transformed park planning, management, and architecture and fundamentally altered the visitor experience in national parks. Since 1959, millions of visitors have climbed the tower, where they can see distances of up to 100 miles over the surrounding mountains and valleys. Some minimal preservation work today on the tower will ensure that visitors continue to experience this unique structure spiraling up from the highest point in the park.

For more information about the Clingmans Dome Tower, please visit the park website at https://www.nps.gov/grsm/planyourvisit/clingmansdome.htm.

Smokies Invites the Public to #OptOutside after Thanksgiving Day

Great Smoky Mountains National Park invites visitors to join a park ranger for a guided hike on Friday, November 24 or a service opportunity on Saturday, November 25. Hikes will be offered near the Oconaluftee Visitor Center and Elkmont Campground, providing an outstanding opportunity for people of all ages to #OptOutside and enjoy the park.

Rangers and park volunteers will help visitors discover special cultural and natural resources along the hikes. Visitors may also choose to hike on their own and can come to any of the park’s visitor centers throughout the Thanksgiving holiday weekend to receive information about hiking options including several short nature trails that are perfect for children.

“The park offers incredible places to enjoy a hike or a scenic drive with friends and family over the Thanksgiving holiday weekend,” said Acting Superintendent Clay Jordan. “We encourage you to join us in exploring the park and creating new memories over the holiday.”

The park has over 800 miles of trails to explore throughout the year with every season offering its own special rewards. During late fall and winter, the absence of deciduous leaves opens new vistas revealing stone walls, chimneys, and foundations. These reminders of past communities allow hikers to discover a glimpse of history along park trails.

Friday, November 24 at 10:00 a.m. – Mingus Creek Cemetery Hike
The 4.2-mile roundtrip hike on the Mingus Creek Trail is rated moderate but does have several steeps section near the cemeteries. The trail parallels Mingus Creek with several log foot bridges along the way. The ranger leading the hike will share some of the burial traditions and customs represented in the cemeteries of the Smokies to discover the beliefs and values that defined this southern Appalachian community as we visit two historic cemeteries. The guided portion of the hike will end after 2.1 miles at the Mingus Creek Cemetery. Participants can return to their cars at their own pace, further explore the area, or enjoy a picnic lunch near the cemetery. Meet in the Mingus Mill parking area, less than a mile north of the Oconaluftee Visitor Center, along Newfound Gap Road. For more information, call the Oconaluftee Visitor Center at 828-497-1904. 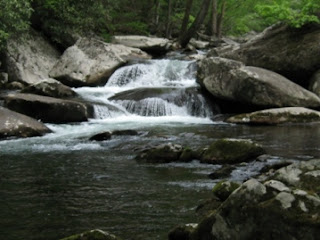 Saturday, November 25 at 9:00 a.m. – #OptOutside with Service
Help clean fire pits and perform other maintenance tasks around the Elkmont Campground to help care for one of the park’s busiest campgrounds. It is particularly important that we keep the area free of trash and food scraps to help us protect wildlife! Expect 3 hours total for the service project and then join us for an optional hike to Huskey Branch Falls! Bring a sack lunch and we’ll take a hike along the nearby Little River Trail to the falls and enjoy the beautiful scenery as we eat! The hike is a moderate 4.3 miles roundtrip and is expected to take 3 hours. Meet at the Elkmont Campground Office at 9:00 a.m., 7 miles west of Sugarlands Visitor Center in Elkmont. For more information, call the Volunteer Office at 865-436-12665.

What to bring: Weather in the Smoky Mountains can be unpredictable, especially in the fall. Rangers recommend participants dress in layers, wear sturdy shoes, and bring rain gear. Participants should also bring a bag lunch, snacks, and plenty of water.

Great Smoky Mountains National Park officials hosted a celebration for the bridging of the Foothills Parkway’s ‘Missing Link.’ Lane Construction Company of Charlotte, NC recently completed a seven-year project to design and build five bridges at a cost of $48.5 million. This marks the first time that vehicles can travel the entire 16-mile section of the Foothills Parkway extending from Walland to Wears Valley, TN.

“We are excited to mark another milestone in the completion of this spectacular section of the Foothills Parkway,” said Acting Superintendent Clay Jordan. “With the missing link now bridged, we look forward to finishing the final paving and then opening the roadway to the public by the end of next year.”

Construction of this 16-mile section began in 1966. Most of the roadway was completed by 1989 when the project came to a halt due to slope failures and erosion during construction of the last 1.65 miles – known as the ‘Missing Link.’ The engineering solution included the construction of nine bridges to connect the roadway in an environmentally sustainable manner. These last five bridges mark an important milestone by completing the ‘Missing Link.’ Since 1966, $178 million has been invested in this 16-mile section of the Foothills Parkway spanning parts of Blount and Sevier Counties.

Friends of the Smokies and Sunny Point Café in Asheville are joining forces this November to raise money for radio and emergency communications improvements in Great Smoky Mountains National Park. Donation envelopes will be available on tables at the restaurant throughout the month, and all gifts made by patrons will be matched up to $1,000 by Sunny Point Café.

Donations made to Friends of the Smokies at Sunny Point Café for a new radio system will keep national park visitors, volunteers, and rangers safe by allowing the park to communicate with police, fire, and emergency services in neighboring communities. It will also improve the internal communication system of the national park’s law enforcement rangers, search and rescue, wildland fire, and emergency dispatch officers.

“Our mission is to preserve, protect and provide for our park so keeping our visitor safe by implementing a new radio system is a top priority for us,” said Anna Zanetti, North Carolina Director of Friends of the Smokies. “We are thankful to Sunny Point Café for providing this generous matching gift opportunity.”

Sunny Point Café is located at 626 Haywood Road, Asheville and is open daily.