Over the past couple of years I've had the opportunity to review several books concerning mountaineering in the Himalayas. Although the subject matter may be slightly off the normal topic for this blog, you may want give this one a closer look. Tempting The Throne Room is a new book written by local adventurer, John Quillen, from Knoxville. In addition to reaching the summits of big mountains around the world, John has hiked all 900 miles of trails in the Great Smoky Mountains. He's also been the leading voice in the fight against the controversial implementation of backcountry fees within the park. 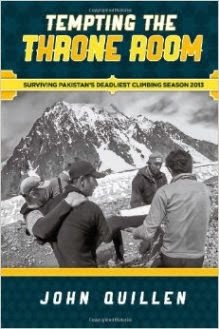 Tempting the Throne Room: Surviving Pakistan's Deadliest Climbing Season 2013 chronicles John's ill-fated expedition to 26,414-foot Broad Peak, the 12th highest mountain in the world, located in the Karakoram Mountain Range of the Pakistani Himalayas. In 2013 a total of 21 climbers died in the Karakoram -  the highest number of casualties ever in one season in Pakistan. Six of those climbers were associated with Quillen's expedition.

During the acclimatization process John's hiking partner shattered his leg while descending from Camp 1 - at an elevation of roughly 18,000 feet. What ensued was a fairly complicated rescue mission to get his partner down to base camp, and then off the mountain completely. Forebodingly, this event would prove to be an omen of what was to come for the expedition.

Quillen also goes into great detail on the intricacies and realities of what happens once you arrive "in-country", as well as on the multi-day trek to base camp. I really appreciated this "behind the scenes" look at the messy process of getting proper permits, the terrifying drive along the Karakoram Highway, as well as the many travel issues associated with the 100-mile trek to base camp.

Along the route the team learned of the 11 climbers on Nanga Parbat who were murdered by Taliban terrorists disguised as police. Not far from their own location on the road to Broad Peak, the Taliban casually walked into base camp and executed the multinational team of mountaineers.

Quillen's own group passed checkpoints where soldiers were dressed in jump suits and gold chains. Though this was apparently normal, John couldn't help but suspect that they may have been Taliban just as well.

All in all I thought this was a solid accounting of the tragedies on Broad Peak last year. I thought what made this book stand out was John's retelling of his own experiences along the route to Broad Peak, the glimpse he provided into the realities of life in base camp, and his role in the rescue of his climbing partner.

Tempting The Throne Room is now available at Amazon. You can also find additional information at www.temptingthethroneroom.com.