Tomorrow marks the 70th birthday of one of the most recognizable characters in American history. On August 9, 1944, the Cooperative Forest Fire Prevention Campaign published the very first Smokey Bear poster (photo below). 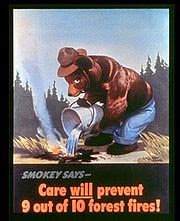 The Ad campaign came about as a result of World War II. Thinking that wildfires could be used as a weapon, the Japanese military in 1942 began making attempts at starting wildfires along the coastal forests of southwest Oregon. Between November of 1944 and April of 1945 the Japanese began a campaign of launching more than 9000 "fusen bakudan", or fire balloons, into the jet stream. The balloons were equipped with a 15 kilogram antipersonnel bomb and two incendiary devices, which were designed to explode upon impact. It's estimated that 300 to 1000 of the balloons made it to the United States, including as far inland as Iowa and Michigan.

Fortunately the strategy had very little impact, though six people were tragically killed. On May 5, 1945, a teacher and her school children were on an outing near Lakeview, Oregon when they found one of the balloons in the woods. While dragging it out of the forest the bomb exploded and killed the teacher, Elsie Mitchell, as well as five of the children, all between the ages of 11 and 13.

Though not successful in starting any major wildfires, the potential for mass destruction was still present. Since most able-bodied men were serving in the military at that time, none could be spared to help fight forest fires. The goal of the Smokey Bear Ad campaign was to educate the public about the danger of forest fires in the hope that local communities would prevent them from being started. Although the message has changed, that campaign continues to this day.

According to a 2009 report by the Ad Council, Smokey Bear and his message are recognized by 95% of adults and 77% of children.

To help celebrate his 70th birthday, here's a video montage of Smokey Bear Ads throughout the years: