Higher Prices and Limited Access Coming to a Park Near You

Perhaps the title to this blog might be construed as being highly provocative, but reality tells me that many of the trends I'm seeing are already pointing in these directions. Please note that I'm in no way advocating for either of these as possible solutions to perceived problems, but rather simply pointing out where I believe our national parks are headed. 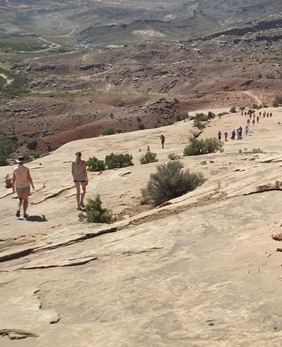 The perceived problem among many within and outside of our national park system is that our parks and recreational areas have become overcrowded. One only has to look at the almost constant gridlock in Cades Cove in the Great Smoky Mountains, or the over-crowded parking at the Bear Lake Trailhead in Rocky Mountain, or the congestion on Yellowstone's roads throughout the summer, to see that the pundits and park managers may have a point. As further evidence, you may also recall that our national parks saw record breaking crowds in 2014.

As a result of many factors, including increased visitation, almost every major national park has raised entrance fees over the last several months. Other parks and national forest lands, such as the Great Smoky Mountains, have instituted, or have increased backcountry camping fees.

This past May Glacier National Park announced a public comment period for a series of alternatives they're proposing to manage the Going-to-the-Sun Road Corridor. Included among those proposals to manage congestion on the road are to "utilize a timed entry system or reservation system during peak season" and "require day hike permits on some trails during peak season".

It's pretty clear to me that the wheels are already in motion for raising fees and limiting access to high traffic areas.

What prompted this blog posting was an interview I heard the other night on the nationally syndicated John Batchelor Show. The host interviewed Terry Anderson from the Property and Environment Research Center in Bozeman, Montana, who has put forth several possible solutions to overcrowding in our parks and recreational areas. The 10 minute segment starts at roughly the 19:25 mark in this podcast if you wish to listen to the interview. You can also read the original article, which sparked the interview, as published in the Montana Standard.