Great Smoky Mountains National Park officials have announced a series of controlled burns within the Cades Cove and Cataloochee areas of the park. Both operations could begin as early as Monday, October 26th. 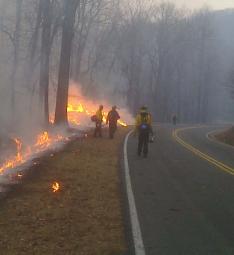 Park fire management officials are planning a series of controlled burns within the Cades Cove area of the park, weather permitting, which could begin as early as Monday, October 26, and may continue intermittently through mid-November. Fire managers have identified multiple fields totaling approximately 300 acres for fire treatment. These controlled burns will reduce woody encroachment into the fields, help perpetuate native herbaceous species, reduce exotic plant species, and maintain the historic landscape of the cove.

During prescribed fire operations, visitors may experience brief delays due to activities adjacent to the loop road or smoke. Fire managers ask that motorists reduce speed in work zones. If smoke is present, keep windows up and headlights on, and do not stop on roadways. Staff members will be present at overlooks to answer questions during operations.

The loop road and historic structures will remain open to visitor use but brief delays or temporary closures of adjacent roads and trails may occur to ensure public safety during operations. Visitors should expect to see fire activity and smoke during prescribed burns.

Fire managers plan to use a series of low-intensity controlled burns over a number of years to restore the oak woodlands on the area's upper slopes and ridges. This will be the second time fire has been used on this site as part of that restoration effort. Fire and drought-tolerant natural communities are important to overall ecosystem health, and they are in decline throughout the Southern Appalachian region. The controlled burn will be conducted by national park staff and is being funded by the Rocky Mountain Elk Foundation.

"One of the goals of the prescribed burn is to improve elk forage and habitat," stated Great Smoky Wildland Fire Module Leader and Burn Boss, Shane Paxton. Over time, the increase in herbaceous vegetation on the forest floor will improve forage for elk which graze the nearby meadows. Roads and trails will remain open to the public though temporary closures to the Little Cataloochee Trail may occur if fire activity warrants. Visitors should expect to see smoke in the area.