Designs for commemorative coins honoring the 100th anniversary of the National Park Service (NPS) were unveiled today during a ceremony at the Department of the Interior. NPS Director Jonathan B. Jarvis and National Park Foundation (NPF) President and Chief Executive Officer Will Shafroth joined Treasurer of the United States Rosie Rios for the unveiling.

Public Law 113-291 authorizes a three-coin program of $5 gold, $1 silver and half-dollar clad coins with designs emblematic of the 100th anniversary of the National Park Service.

Pricing for the National Park Service Commemorative Coins will include surcharges—$35 for each gold coin, $10 for each silver coin, and $5 for each half-dollar clad coin—which are authorized to be paid to the NPF. The funds are to be used for projects that help preserve and protect resources under the stewardship of the NPS and promote public enjoyment and appreciation of these resources.

"When fully realized, the potential impact derived from the commemorative coin sales will be tremendous," said Shafroth. "The funds will improve trails, introduce more young people to the parks, and connect our citizens to the history and culture of our nation."

The gold coin obverse (heads side) features John Muir and Theodore Roosevelt with Yosemite National Park’s Half Dome in the background. Inscriptions are "LIBERTY," "2016" and "IN GOD WE TRUST." United States Mint Sculptor-Engraver Don Everhart designed and sculpted the obverse.

The gold coin reverse (tails side) features the NPS logo, with the inscriptions "UNITED STATES OF AMERICA," "E PLURIBUS UNUM" and "$5." Everhart also designed and sculpted the reverse. 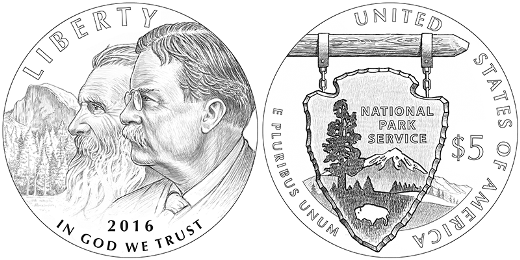 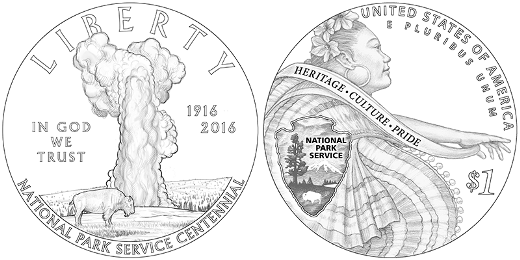 The clad half-dollar obverse features a hiker discovering the majesty of the wilderness and a small child discovering a frog hiding in ferns, celebrating the diversity and breadth of the NPS. Inscriptions are "LIBERTY," "2016," "IN GOD WE TRUST," "1916" and "NATIONAL PARK SERVICE." The reverse was designed by AIP artist Barbara Fox and will be sculpted by United States Mint Sculptor-Engraver Michael Gaudioso. 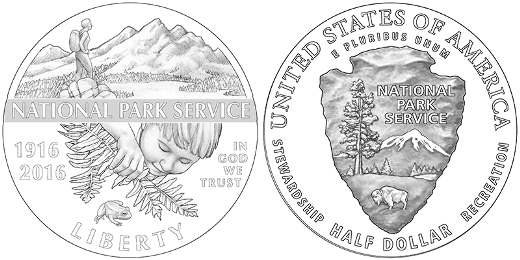 The United States Mint will announce the coins’ release date and additional pricing information prior to their release in 2016. The commemorative coin is one of many incredible ways to celebrate the 2016 centennial.

Sign up to receive information about the coin sales kick off and view the coin designs at www.nationalparks.org/coins