A couple of weeks ago Kathy and I paid a visit to the Great Smoky Mountains to take advantage of some nice spring-like weather, and to do a little hiking. As a result, we were able to do a couple of new hikes, which have just been added to our website. Here's a quick rundown of the new hikes: 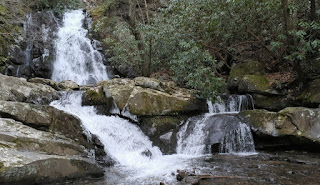 Spruce Flats Falls - This hike has been on my radar for several years now, and I finally got a chance to check it out. It didn't disappoint - in fact, I would say it has to be one of the most scenic waterfalls in the park. Though it isn't marked on the official park map, the trail is well defined and very easy to follow.

Avent Cabin - This is another destination that isn't marked on the official park map. This hike visits the former art studio of Mayna Treanor Avent, who was a nationally renowned artist. Her works have been exhibited across America, including the Smithsonian Institute's National Portrait Gallery.

Ogle Place - This short loop hike along Cherokee Orchard Road visits the Ogle Farmstead. Along the route you'll visit the cabin that was built by Noah “Bud” Ogle in the 1880s, his barn, as well as his "tub" mill.

Gatlinburg Trail - If you're looking for an easy hike just outside of Gatlinburg, the Gatlinburg Trail is a great choice. The trail follows along the West Prong of the Little Pigeon River for a large portion of the hike. It also visits the remnants of an old homestead.

During our visit we also took the opportunity to hike the Bullhead Trail, which was heavily damaged during the November 2016 wildfire. As a result of many downed trees the park was forced to close the trail for almost two years. After removing enough of the deadfall to make the route safe, the park finally reopened the trail to the public in late-October of 2018. Although there are several burn scars along the route, the wildfire has created huge panoramic vistas in several places. As a result of all the changes, we have updated the two hikes on our website that utilize the Bullhead Trail. The shorter hike ends at a large cairn built by the Civilian Conservation Corps in the mid-1930's, now known as "The Pulpit". The longer hike goes all the way to the top of Mt. LeConte. As you can see from the new photos on these pages, I have to think that this trail might become the most popular route to the summit in the coming years.