Lightning and what you can do while hiking

Peak hiking season has finally arrived, so now is a good time to review one of the hazards hikers typically encounter during the summer months. With warmer weather comes an increased chance of running into a thunderstorm while out on the trail, especially during the afternoons. Hikers need to be watchful for storms that produce lightning, particularly in open areas where you may be the highest object in the immediate area.

According to the National Weather Service there are, on average, roughly 20 million lightning strikes that result in 273 injuries and 48 deaths in the U.S. each year. Although those casualty figures may seem fairly low, you may want to note that North Carolina ranked 3rd, and Tennessee ranked 5th, in total lightning fatalities between 1959 and 2007. 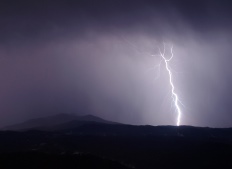 Although this may seem counterintuitive, but according to the National Outdoor Leadership School, lightning density maps show more lightning at lower elevations than on the ridges in the Appalachian Mountains, where the air is more humid. In the Rocky Mountains, the opposite is true. Lightning strikes occur more often at higher elevations as a result of the drier climate.

The good news is that the number of lightning related fatalities has trended downward since 1940 when deaths were measured in the hundreds. There are probably several reasons for this, including a much better understanding of lightning, which has lead to better education on safety and avoidance.

So, what can you do if you’re out hiking and a storm approaches? The first thing you need to understand is that lightning can strike more than 10 miles away from the center of a thunderstorm - well beyond the audible range of thunder. Therefore, if you hear thunder, you’re already within striking range of a storm and should seek shelter immediately.

To measure the distance between you and a lightning strike, count the number of seconds between the time you see a flash and the bang of thunder. Divide that number by five. This will give you the number of miles the lighting strike is away from you.

If you do caught by a storm, and you’re below treeline, here are a few things that you can do to improve your safety:

• Buildings with exposed openings such as backcountry camping shelters or picnic pavilions are not safe.

• Avoid caves as they can channel electricity fairly well.

• Avoid close contact with others. Spread out at least 50 feet apart in order to minimize the chance of everyone in a group being struck.

• Get away from water, and avoid any low spots that accumulate rain run-off.

• With no other options, take shelter under a group of shorter trees among larger trees. A thick forest is far better than a lone tree or a small group of trees.

• Drop all metal objects during a storm, such as internal or external frame backpacks, trekking poles (including aluminum and carbon fiber), crampons, jewelry, etc., and move 100 feet away from them.

If you’re out in the open or above treeline:

• Avoid solitary trees – they’re one of the most dangerous places to be during a storm. Also, avoid any other objects that are higher than the rest of the terrain around you.

• If you can’t immediately get below treeline, find the lowest point of open area and move there quickly.

• Adopt the lightning position as a last resort: Crouch down on the balls of your feet and keep them as close together as possible. Cover your ears, and don’t allow other body parts to touch the ground. By keeping the surface area of your body in contact with the ground to a minimum you reduce the threat of electricity traveling across the ground from affecting you. Keep in mind that this position should only be used as a last resort.

If you feel hairs on your head, leg, or arms tingling and/or standing on end, it means you’re in an extremely high electrical field. If you or any member of your group experiences any of these signs, take it as an indication of immediate and severe danger. The response to any of these signs is to instantly (seconds matter) move away from long conductors (metal fencing, power lines), tall trees, or high points, and spread out and adopt the lightning position.

For more information, including first aid for victims, please click here and here. Jeff
HikingintheSmokys.com
Posted by The Smoky Mountain Hiker at 9:26 AM

My husband and I always look for caves in case of storms while we're hiking...guess that's not such a good idea - thanks for the info!