Last week I posted a blog about hiking to the summit of Mt. Rogers, the highest point in Virginia. Today I wanted to highlight three other areas that you may or may not be aware of, all of which are outstanding hiking destinations: 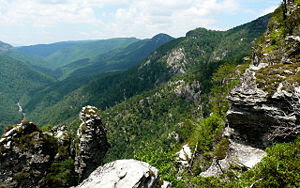 Linville Gorge, also known as the Grand Canyon of the East, is one of the wildest, most rugged gorges in the eastern United States. It's also an outdoor paradise for hikers and backpackers. The entire area lies within the Pisgah National Forest, located roughly 60 miles northeast of Asheville and can be accessed via the Blue Ridge Parkway near milepost 314. The Gorge encompasses more than 12,000 acres around the Linville River, making it the third largest wilderness area in North Carolina, and one of only two wilderness gorges in the southern United States.

There are 39 miles of trails that weave in and out of Linville Gorge. Most trails start along either of the two gravel forest service roads that traverse the east and west rims, and lead down towards the river. At the bottom of the gorge is the longest trail, the 11.5-mile Linville Gorge Trail, which runs along the west side of the river, and allows backpackers to create several overnight loop hikes.

A fairly popular destination 2 hours northeast of Knoxville is Roan Mountain. From Carvers Gap, located on State Route TN-143 and NC-261, many hikers will make the trek out to Grassy Ridge Bald, one of the highest grassy balds in the Appalachian Mountains. 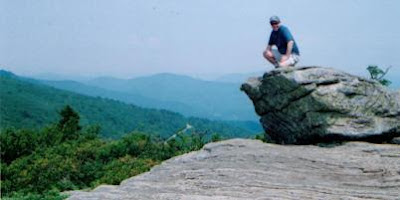 As you proceed north along the Appalachian Trail, hikers will pass over Round Bald and Jane Bald before reaching the summit of 6189-foot Grassy Ridge Bald. The panoramic views from the summit area are absolutely stunning. On a clear day you can see Grandfather, Beech and Sugar Mountains towards the east, and Mt. Mitchell and the Black Mountains towards the south.

Spanning roughly 7 miles, and covering an area roughly 1000 acres in size, Grassy Ridge is also the longest stretch of grassy bald in the Appalachian Mountains.

If visiting Roan Mountain in early June, be sure to make the drive up to the Rhododendron Gardens to see the largest natural rhododendron garden in the world.

Red River Gorge in eastern Kentucky is where my love affair with hiking began (many years ago!). The “Red” is a unique and scenic natural area in the Daniel Boone National Forest known for its abundance of natural stone arches, unusual rock formations, and spectacular sandstone cliffs. With over 100 natural arches within its boundaries, Red River Gorge has the greatest concentration of arches east of the Rocky Mountains. And, as a result of its abundance of cliffs, rock climbers from all over the world have discovered first class climbing in the Gorge as well. 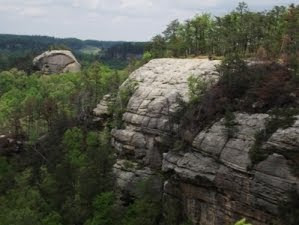 Red River Gorge was designated as a Geological Area by the Forest Service in 1974. With passage of the Kentucky Wilderness Act of 1985, the U.S. Congress designated roughly half of the 26,000-acre Gorge area as the Clifty Wilderness Area.

Many trails traverse in and around the natural rock formations, including an 11-mile section of the Sheltowee Trace, a 282-mile multi-use, National Recreation Trail that traverses the length of the Daniel Boone National Forest that passes through Cave Run Lake, Natural Bridge State Park, Laurel River Lake, Cumberland Falls State Resort Park and the Big South Fork National Recreation Area.


Jeff
Hiking in the Smokies
Posted by The Smoky Mountain Hiker at 7:01 AM