The last week of November was a busy one for rangers in Great Smoky Mountains National Park. During that time period, rangers dealt with three serious medical incidents, two of them requiring carryout evacuations by interdivisional litter teams. 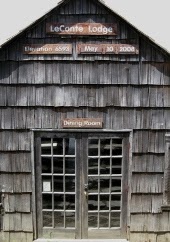 Late on the night of November 22nd, park dispatch received a report from the concession-run lodge on Mt. Le Conte that a visitor had suffered a head injury after falling down a steep embankment and that the woman had become combative during attempts to render aid. Rangers Brad Griest and Mark Eckert hiked through the night, arriving at the lodge around 6 a.m. Air rescue was impossible due to high winds, so a carryout litter team was assembled that consisted of 16 employees from three divisions. The team arrived at the trailhead with the woman just after 4 p.m. She was transferred to an ambulance and transported to an area hospital. Supervisory Park Ranger Bobby Fleming was incident commander.

Rangers Jamie Sanders, Ryan Rohr and Steve Spanyer responded to an accident on the Cades Cove Loop Road on November 26th. They found that a 48-year-old woman had suffered an open humorous fracture with uncontrolled arterial bleeding. The rangers applied a combat application tourniquet (CAT) and provided basic life support until an ambulance arrived 35 minutes later. Weather conditions prevented air evacuation, so she was taken by ambulance to the University of Tennessee Medical Center, where she’s expected to make a full recovery. Emergency room doctors reported that the timely application of the CAT saved the woman’s life. CAT tourniquets had been issued to all park law enforcement rangers as part of special tactical EMS kits for personal use in event of a severe trauma.

Early on the afternoon of November 30th, dispatch was notified of a hiker with a possible broken leg on the Alum Cave Trail. A rescue team consisting of 15 employees from two divisions responded. The litter evacuation included a short technical lowering. The litter team reached the trailhead just after 9 p.m. The injured man was transported to an area hospital, where x-rays confirmed that he’d suffered fractures of the tibia and fibula. Rescue operations were complicated by temperatures in the single digits as well as ice and snow on the trail. Supervisory Park Ranger Bobby Fleming was incident commander.


Jeff
Hiking in the Smokies
Posted by The Smoky Mountain Hiker at 9:58 AM

I sure am thankful that these highly trained teams are available and willing when help is needed in the Park! No matter how careful you are, there's always that risk that something might go terribly wrong.

That is something to remind those of who complained when access was denied during the government shutdown.