The NPS Morning Report is reporting that on October 19, 2013, rangers in the backcountry of Grand Canyon National Park became suspicious of the large number of hikers attempting to hike from the North Rim to the South Rim in a single day (known as a “Rim to Rim” hike). The hikers claimed to be hiking only with a small number of friends and not as part of a large group, but many appeared to be avoiding contact with rangers and they all described similar travel arrangements. 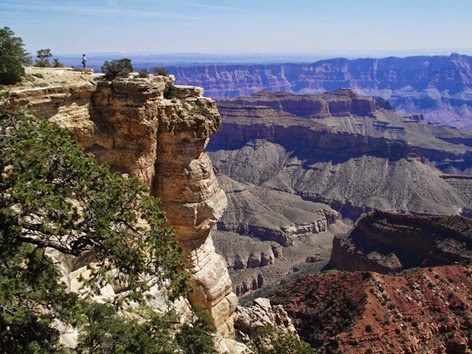 Subsequent investigations revealed that Scott Beck of Phoenix, Arizona, had chartered five buses to transport nearly 300 people to Grand Canyon National Park to hike across the canyon. Beck advertised the hike as the “23rd Annual” trip of a similar nature and charged each participant a set fee. Investigations also revealed that he had specifically instructed each hiker, both verbally and in a written itinerary, to tell rangers that they were “not with a group of 300,” that they were with a small group and had been transported by car or van.

The large number of hikers in the canyon that day caused impacts to vegetation and created long lines at the Phantom Ranch canteen and restroom facilities. The Phantom wastewater treatment operator reported that the sewage treatment plant was operating at capacity. Rangers took complaints from hikers who complained about congestion on the trails. Several minor medicals and search and rescue operations were also attributed to Beck’s group.

During interviews, Beck claimed that his trip was “organized” but not commercial, and that he had not profited. In January 2013, rangers served a search warrant on an online event registration website that Beck had used to solicit trip participants and collect fees. The evidence gathered from the search warrant was used to develop probable cause to charge Beck with engaging in an illegal business operation (36 CFR 5.3) and making false statements (18 USC 1001(a)(2)). Rangers estimated that Beck’s gross income for this event was over $47,000, and he profited by approximately $9,500.

On June 10th, Beck was convicted on one count of engaging in business operations without obtaining a permit in violation of 36 CFR 5.3. Pursuant to a plea agreement, he was sentenced to a year of probation, during which time he is banned from Grand Canyon National Park and from conducting or advertising for any tours or guided trips on national park or national forest lands. He was also fined $500 and ordered to serve 50 hours of community service.

Beck has since formally notified all trip participants that he will no longer be conducting his annual trip, and has pledged to donate $2,000 to Grand Canyon National Park.

The investigation was led by rangers and conducted with the assistance of Investigative Services Branch special agents.

I'm guessing he started with good intentions but then realized he could make a nice profit by selling more spots.
Sounds like a fair sentence he received.
I've been on the other end of this though with over zealous Feds writing me a Federal Citation for asking for gas money on a paddling event on the Ocoee. There were 12 of us all with our own boats. Permits are not needed for individuals or small groups. I made the mistake of asking for gas money since I towed the trailer of boats. The feds claimed I was running a commercial trip and cited me. I showed up for court and the judge chastised the solicitor and tossed out the charges.
In my opinion they need to clarify the rules a bit more. The sections cited in my case and this could punish small groups just trying to cover their own expenses.
That doesn't sound like the case with this guy though. He clearly abused the park resources for a profit.

Dante - I agree you were absolutely the victim of an over-zealot officer. I'm glad justice was served and the judge thru the case out. However, this guy was on the complete opposite of the spectrum. Even if he were heading across the canyon with only 30 hikers, that is still a pretty brazen act. But 300 hikers is completely ridiculous!

I think a lot of our laws are mired in the grey area, and need to be fully interpreted. That's a huge problem in our society - we have way too many laws and rules, and nobody really truly understands them. There was a recent report that said that the average person breaks at least 3 Federal laws a day - without even knowing that they're breaking them. That is a serious problem...