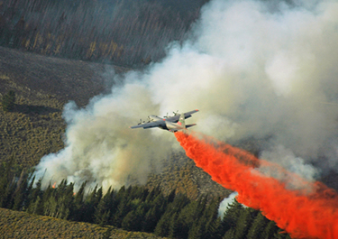 "The 2016 wildfire season is off to a worrisome start. Southern California, the Great Basin in Nevada, portions of the southwest, and even Florida and Hawaii are particularly vulnerable this year. In California, more than 40 million trees have died, becoming dry fuel for wildfire," said Vilsack. "Congress must take action now to ensure that we, and, ultimately the firefighters we ask so much of, have the resources to do the restoration and wildfire prevention work necessary to keep our forests healthy."

Forest Service Chief Tidwell underscored the Forest Service's commitment to ensuring the protection of firefighters' lives. Last year, seven members of the Forest Service firefighting team were lost in the line of duty, and 4,500 homes were damaged or destroyed. This year the Forest Service is able to mobilize 10,000 firefighters, 900 engines, 300 helicopters, 21 airtankers, 2 water scoopers and over 30 aerial supervision fixed-wing aircraft. Together with federal, state and local partners, the agency is positioned to respond wherever needed.

In recent years fire seasons are, on average, 78 days longer than they were in 1970 and, on average, the number of acres burned each year has doubled since 1980. As a result, the Forest Service's firefighting budget is regularly exhausted before the end of the wildfire season, forcing the Forest Service to abandon critical restoration and capital improvement projects in order to suppress extreme fires.

Last December Vilsack told members of Congress that he will not authorize transfers from restoration and resilience funding this fire season. Instead, Vilsack has directed the Forest Service to use funds as they were intended. For example, restoration work through programs like the Collaborative Forest Landscape Restoration Program and implementation of the National Cohesive Strategy, are reducing the size and severity of wildfires. USDA, the U.S. Department of the Interior and other partners are working with at-risk communities to promote community and homeowner involvement in mitigating wildfire risk, reducing hazardous fuels and accomplishing treatments that increase forest health and resilience.

Even a so-called normal year is far worse than it used to be. On average, wildfires burn twice as much land area each year as they did 40 years ago and the threat continues to increase.

Over the last two years, $237 million has been permanently shifted from the Forest Service non-fire budget forcing the department to abandon critical restoration and capital improvement projects in order to suppress extreme fires. This loss in funds to firefighting took place before a single fire broke out in 2016.

For the first time in its 111-year history, over half of the Forest Service's 2015 budget was designated to fight wildfires, compared to just 16 percent in 1995. 2015 was the most expensive fire season in the department's history, costing more than $2.6 billion on fire alone.