This would be no ordinary excursion.

Zac, having just completed his sophomore year in high school, was embarking on a year and a 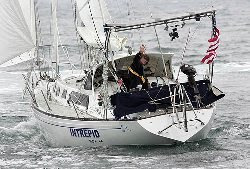 To circumnavigate the globe, Zac will be sailing roughly 24,000 nautical miles in a 1972 Islander, a 36-foot yacht he named the Intrepid.

Right now he is closing in on Port Louis, Mauritius, putting him close to the half-way point on his voyage.

Zac, as one might expect, is no stranger to sailing. He grew up in a family of sailors. He joined the family on sailing ventures to Australia, New Zealand, the UK and Mexico, all the while developing his own seafaring skills as he grew up on the seas.

In addition to those family excursions, he’s had experience racing, crewing and delivering yachts of all sizes and value. He’s crewed for delivery captains up and down the west coast, often given sole responsibility for navigating, sail trim and resolving mechanical problems. Zac also has a great deal of experience working on yachts, including installing and repairing rigging up in the crow's nest, down below on thru hull fittings, as well as overhauling diesel engines.

To assure his family that he’s safe and sound, Zac calls his family at least twice a day on his satellite phone. He also stays in contact with the rest of the world using an email service called SailMail.

That phone came in handy one day when he needed some quick advice from his father. Off the coast of Indonesia, in perhaps the most dangerous moment of his trip so far, he had an encounter with pirates.

At one point in his voyage a large wooden vessel that didn’t show-up on the radar, flying no flags, with its crew hidden and not responding to radio calls, swept to within 200 yards of the Intrepid.

Zac called his father, who instructed him to load his .357-caliber pistol and be prepared to shoot to kill.

After riding in the wake of the Intrepid for several minutes the vessel finally changed course and motored off.

Besides his encounter with pirates, he cites his biggest challenges as going for long periods of time without sleep and not feeling hungry, but knowing he has to eat in order to keep his strength up. He also mentions unpredictable seas, the constant squalls, pelting rain and the rolling waves in every direction wears on him as well.

Once he reaches Mauritius he’ll need to spend some time taking care of some extensive repairs to his boat. The most treacherous portion of his journey - from Mauritius to Durban, South Africa, and around the Cape of Good Hope - lies directly ahead. He’ll be in a hurry to try to beat the storm season.

Below is a short video showing some footage of Zac’s journey so far:

Smoky Mountain Day Hikers Store Quality gear and apparel from some of the best outdoor brands.

Posted by The Smoky Mountain Hiker at 12:43 PM