Tomorrow is the biggest game of the young college basketball season. Tomorrow, on CBS, at 2:00 PM EST, my Xavier University Musketeers will take on Duke.
Okay, maybe I’m exaggerating just a little, but this really is a huge game for us. Besides playing arguably the best program in the country, Xavier owes a little revenge on the Blue Devils. Duke knocked Xavier out in a nail-biter in our first ever bid to make the Final Four in 2004. We lost 66-63 in an absolute heart-breaker, which most Xavier fans still haven’t gotten over. We also lost to Duke in the second round of the 1987 tournament, 65-60.
Tomorrow, however, I believe the Muskies will change this trend and leave the Izod Center in East Rutherford, NJ, victorious. Here are my reasons:
Although the roster of the Duke Blue Devils is loaded with McDonalds All-Americans, Xavier is

filled with Skyline All-Cincinnatians! For those of you not familiar with Cincinnati, Skyline Chili is the national cuisine for Cincinnatians. Ask any ex-pat and chances are they’re craving the Greek-style chili right now.
Skyline also happens to be the official sponsor of the "Crosstown Shootout", the annual game between the University of Cincinnati and Xavier University. Since Xavier has already won this year’s game, and has more or less dominated the series in recent years, I have unofficially bestowed upon the team the title of “Skyline All-Cincinnatians” in order to give our guys a little more national recognition and respect.
Xavier also has a bit of serendipity working on its side. This past Wednesday (December 17), 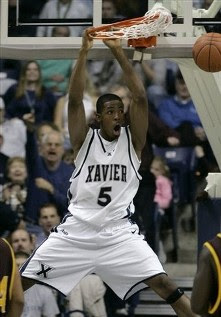 Duke beat UNC Ashville after a layoff of 11 days for exams. They just missed the century mark by 1 point. Last year, on the exact same date, after a 9 day layoff for exams, Duke scored over 100 points when they beat Albany 111-70. The interesting part about this analysis is that on Duke’s next game, played on December 20 (same day as this years Xavier-Duke game), in New York City (just across the Hudson from East Rutherford), the Blue Devils lost to Pittsburgh, which happens to be the alma-mater of Xavier’s coach, Sean Miller.
Moreover, Duke, at the time of their loss to Pitt, was ranked #6. Duke is currently ranked # 6 in both the AP and the USA Today polls.
As you can plainly see, the stars are completely aligned for the Musketeers! I’m sorry to say, but Dickie V, Jay Bilas and Billy Packer will be crying in their beer once the final horn blows.
Go Muskies!

Smoky Mountain Day Hikers Store Quality gear and apparel from some of the best outdoor brands.
Posted by The Smoky Mountain Hiker at 12:32 PM

count me as one of those ex-pats...that three way looked really good!

Juggler - you're from Cincy? Where abouts? I grew up in Western Hills - went to Elder H.S. I used to work at the Skyline on Bridgetown Rd.

What a small world...

I grew up in Toledo, went to Ohio State, and settled in Cincy before I moved to the left coast. Cincy is the only place in Ohio I'd ever want to live again. Loved it there. I lived in Mt. Washington. It was really cool to live there when the Reds won the World Series in 1990.

Western Hills...is Putz's still out that way? They had the best metts.

I've been living in Louisville, Ky since 1994. Fortunately we have have both Skyline and Graeters here. Skyline does pretty well here, but Graeters is just as well known here as in Cincy. The one up the street from us is an absolute gold mine.