Just over two weeks ago, a group of adventurers began their trek to retrace Ernest Shackleton’s first expedition to the Antarctic in honor of the expedition’s 100th anniversary.

The Matrix Shackleton Centenary Expedition is recreating history by crossing Antarctica precisely 100 years after Ernest Shackleton made his first attempt in 1908. Although it set a record at the time, Shackleton fell short of reaching the South Pole by 97 miles. He was forced to turn back in order to save the lives of his men from hunger and physical exhaustion. After returning home, Shackleton remarked to his wife: “Better a live donkey than a dead lion.”

Now, a team of descendents from the 1908 expedition, including Patrick Bergel, great-grandson 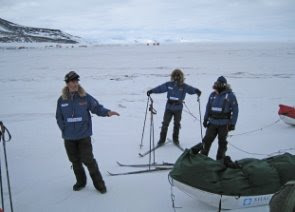 of Ernest Shackleton, are currently in the process of retracing the footsteps of their ancestors in order to finish the job and reach the South Pole.

The expedition originally had planned on departing from the Shackleton Hut at Cape Royds at 10am on October 29, 2008, exactly one hundred years to the day when Shackleton and his men set out. However, a storm left them stranded in Puenta Arenas and prevented them from even reaching Antarctica for more than two weeks.

Travelling unguided on skis, and hauling their own expedition supplies in sledges, they will cross the Ross Ice Shelf, the Beardmore Glacier, and then 400 miles across the Polar plateau to the South Pole.

In total, the Matrix Shackleton Centenary Expedition will travel 900 miles in roughly 80 days. They can expect average temperatures of around -75 degrees, and winds that can regularly reach 120 miles per hour.

The expedition is currently crossing the Ross Ice Shelf. They have traveled a total of 171 nautical miles to date and expect to reach the South Pole sometime in mid-January.

Interestingly, Ernest Shackleton is most famous for his doomed 1914 - 1916 expedition to the Antarctic.

His ship, the Endurance, became stuck in an early ice floe, forcing Shackleton to order the ship to be wintered in the frozen sea. The men lived within the ship for several months before the ice destroyed the ship, forcing the expedition to live out on the ice. Two months later, they built sledges and moved to Elephant Island. No one knew what happened to the expedition or where they were. In fact, most people assumed they were probably killed.

Knowing that a rescue wasn’t going to happen, Shackleton made the call to take one of the open 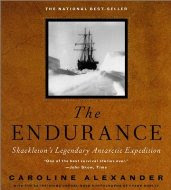 lifeboats and cross 800 miles of frigid sea to South Georgia Island where a small whaling station was located. Incredibly, he landed on the wrong side of the island and was forced to trek over the frozen mountains to reach the station.

Because this expedition occurred just as World War I was beginning, this amazing story of courage, heroism and survival was largely forgotten until Caroline Alexander published her excellent book, The Endurance: Shackleton's Legendary Antarctic Expedition, about the subject in 1998.

If anyone is interested in Arctic exploration or survival stories, I highly recommend this truly riveting book, which chronicles "one of the greatest epics of survival in the annals of exploration."

Welcome to Cyber Monday, the kickoff to the online shopping season. Although Black Friday is over, Amazon.com has extended the best deals of the season through Monday to help you get your holiday shopping done for much less.

Please help support HikingintheSmokys.com and keep the most comprehensive source of trail information in the Smoky Mountains free by shopping from this link:

What a great way to honor one's ancestors!

For those of you interested in Antarctic exploration, another cool site to check out is from an Italian man who is climbing up the highest mountain in Antarctica this month and blogging about it along the way with photos and podcasts (in Italian and English).