In 1955, after raising 11 children, Emma "Grandma" Gatewood became the first woman to solo thru-hike the Appalachian Trail - at the tender age of 67! 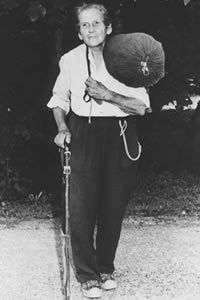 Some claim Gatewood was a pioneer of ultralight backpacking. She never carried more than 20 pounds of gear or food. She wore Keds sneakers, and carried an army blanket, a raincoat, and a plastic shower curtain in a homemade bag slung over one shoulder. According to Appalachianhistory.net, she simply didn't believe in expensive state of the art paraphernalia. “Most people today are pantywaist,” she once stated. Wow, what would she think of today's generation?!?!

To celebrate this hiking pioneer, Eden Valley Enterprises is working on a project to produce a documentary about her life. The documentary will be produced by Peter Huston of FilmAffects. WGTE (PBS Toledo, Ohio) has agreed to be their broadcast sponsor and production partner for the film. However, the project will cost money to get off the ground. Eden Valley Enterprises is spearheading a Kickstarter campaign to raise $3,500 in seed money before approaching larger corporations and foundations for help with the lion's share of the production costs.


Jeff
HikingintheSmokys.com
Posted by The Smoky Mountain Hiker at 7:05 AM