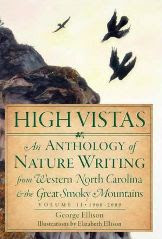 This new release is actually the second and final volume covering nature writings from the region. His latest book focuses on writings from 1900 to 2009, and includes well-known names such as Donald Culross Peattie, Roger Tory Peterson, James Fisher, Edwin Way Teale, Edward Abbey and Scott Weidensaul. The descriptions from these writers, and others, provide specific insights into the region's landscapes, flora and fauna, as well as a sense of wonder at its diversity and beauty.

High Vistas, Volume I, released in 2008, covers writings from the region from 1674 to 1900, and includes essays from celebrated naturalists such as John Muir and William Bartram, as well as lesser-known writers, who describe how they went about exploring and depicting the region.

The two High Vistas volumes are the first anthologies devoted to nature and descriptive writing from Western North Carolina and the Great Smoky Mountains.

Both books include original illustrations from George's wife, Elizabeth.


Jeff
HikingintheSmokys.com
Posted by The Smoky Mountain Hiker at 7:34 AM