Should we be concerned about the decline in backpacking?

The other day I stumbled upon a posting in a blog called Early Warning, which lamented the decline of backpacking. In the posting the author, Stuart Staniford, created a graph of "Back Country Overnights" using data from the National Park Service (from 1979 to 2011). Staniford states that this data "seems likely to be a decent proxy for overall backpacking levels". Here's a look at his graph: 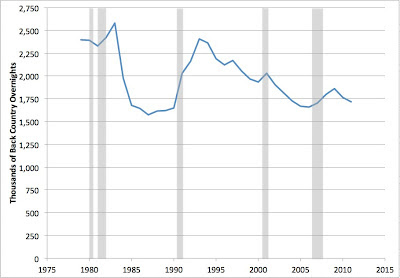 Staniford makes an interesting observation about the data:

"backpacking is a very cheap way to vacation, and it appears that there is something of a tendency for it to increase during and following recessions (grey boxes), and decline during booms."

However, it was Staniford's conclusion that caught my attention: "Whatever the cause, it's a worrying trend for those of us who care about the natural world".

My first problem with the analysis was that he was using data only from the National Park Service, which only covers National Park units, but doesn't include Wilderness Areas, National Forests, National Monuments, BLM lands, State Parks, and other forested areas. My thought was that this slice of data was too narrow to get a true representative picture of backpacking. So I turned to the Outdoor Industry Association (OIA) which publishes the Outdoor Recreation Participation Study on an annual basis. The study looks at participation rates among a variety of outdoor pursuits. Unfortunately the study only goes back to 2006. Moreover, the trends for that time period are very similar to what the NPS is reporting.

According to the latest Outdoor Recreation Participation Study, participation in backpacking was virtually flat when comparing 2011 to 2006. Camping in general fell roughly 7.6% during that same time period.

However, I don't think Mr. Staniford has much to worry about in terms of people enjoying the great outdoors. Participation in day hiking has jumped 15.5% over the last 5 years. Moreover, there are almost 5 times as many people that report participation in hiking as compared to backpacking. All this bodes extremely well for those of us that wish to see continuing support for our wilderness areas.

Maybe the takeaway from all this data is that people are enjoying the outdoors more, and are enjoying it in a broader array of recreational pursuits, but prefer the creature comforts of civilization at the end of the day.


Jeff
Hiking in the Smokies
Posted by The Smoky Mountain Hiker at 7:44 AM