The Outdoor Foundation recently published the American Camper Report, a detailed analysis on camping trends throughout the United States. The report presents information on overall participation, preferences, buying behavior and the future of camping.

The chief takeaway, if we are to believe the headline intro, is that camping participation is growing: "Camping is a true American tradition, and it is gaining in popularity.". The Outdoor Foundation cites that 42.5 million Americans — or 14.9% of the US population over age six — went camping in 2011. This participation rate is up from 39.9 million, or 14.1% of the population, in 2010. However, when viewing participation data over the last several years, based on a graph included with the report, participation has clearly flat-lined since 2006 (the first year data is available). By insinuating a growing trend, I think the Outdoor Foundation has jumped the gun with their overall conclusion. As an indication that the flat-line trend will likely remain in place, the report cites that the average camper went on 4.97 camping trips last year. However, campers are planning an average of only 4.33 camping trips next year, an indication that participation rates may show a decline in the next report. 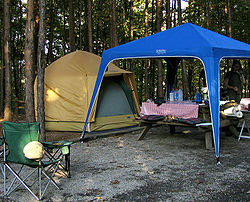 The American Camper Report does show some pretty interesting trends, however. While conventional tents are still available to traditional campers, many campsites are evolving to more modern tastes, providing amenities such as indoor bathrooms, washers and driers and free Wi-Fi. Others have gone a step further by offering heated pools, waterslides, zip lines, golf carts and a calendar full of activities. KOA Campgrounds provides deluxe cabin rentals with flat screen TVs and air conditioning for customers who want to experience the outdoors with all the conveniences of home.

But is this really camping?

Some of the other key findings from the report that I found interesting, include:

• Almost all age brackets added participants, except the adolescent group.

• The Mountain Region has the highest camping participation rate, while the South has the lowest.

• State parks are by far the most popular camping destinations.

• Hiking is the most popular activity to participate in while camping.