Hikers of the Appalachian Trail (AT) have a new shelter where they can rest their bones. The U.S. Forest Service today announced the completion of the Long Branch Shelter, located in the Standing Indian Basin in the Nantahala National Forest.

“Thanks to a lot of hard work and donations from partners, hikers of the AT can now seek shelter from the elements in a new solid, timber-framed structure,” said Mike Wilkins, ranger of the Nantahala District, Nantahala National Forest. “Because it is so well built, the Long Branch Shelter will serve AT hikers for decades to come.”

The shelter is located at the head of the Long Branch Drainage along the AT, a little more than two miles north of Forest Service Road 83. The shelter is about 17 miles from the City of Franklin. 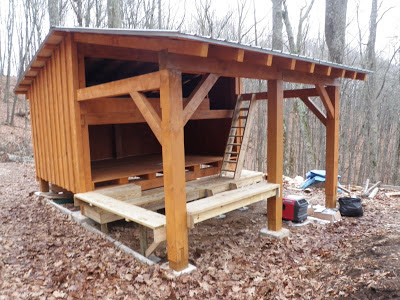 Jeff
HikingintheSmokys.com
Posted by The Smoky Mountain Hiker at 2:03 PM