"Give a month at least to this precious reserve. The time will not be taken from the sum of your life. Instead of shortening, it will indefinitely lengthen it and make you truly immortal. Nevermore will time seem short or long, and cares will never again fall heavily on you, but gently and kindly as gifts from heaven." 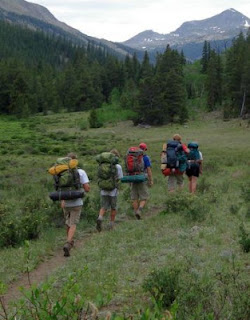 John Muir said this after visiting the future Glacier National Park area in the early 1890s. He obviously knew something back then that's taken researchers some 120 years later to prove.

In a study published this week on PLOS ONE, researchers from the University of Kansas and the University of Utah show that backpackers score almost 50% higher on creativity and problem-solving tests after spending four days in nature - while disconnected from all electronic devices.

The study was conducted on 56 people who went on 4-to-6 day wilderness hiking trips, organized by Outward Bound, in Alaska, Colorado, Maine, and Washington. No phones, tablets, computers, or other electronic devices were allowed on the trips.

Of these people, 24 took a 10-item creativity test the morning before the trip, and 32 took the test on the morning of the trip's fourth day. People who had been backpacking for four days got an average of 6.08 of the 10 questions correct, compared with 4.14 among people who had not yet begun the backpacking trip.

The research, however, could not conclude as to whether the increase in creativity was a result of being immersed in nature, or from being disconnected with technology.

To read the research article from the study, please click here.


Jeff
Hiking in the Smokies
Posted by The Smoky Mountain Hiker at 11:18 AM

Wow, fascinating but not surprising. The more we depend on the power of technology to meet needs, solve problems, do tasks, the less we rely and use our own innate, God=given powers of mind, emotions, heart, soul, spirit, and connection with God-and so those atrophy or lie dormant at least. As the old saying goes, "use it or lose it." Technology can be a useful servant but a terrible master or source of life. Technology has become the drug addiction of choice of many in our culture.