Great Smoky Mountains officials announced today that work is progressing to repair the landslide which has closed a section of Newfound Gap Road (U.S. 441) within the national park. Two key steps are already underway to initiate the reconstruction of the road.

A contract has been awarded for the first phase of work to APAC – Atlantic, Harrison Division to develop an access road to the slide area, remove debris, and stabilize the slope above the work area. This phase is estimated to cost around $200,000 and will prepare the site for the second phase of work which will involve a complete reconstruction of the roadway. This first phase began on January 28th, and is expected to be completed in a few weeks.

The contracting piece for the second phase, involving the actual road reconstruction, was initiated on Friday January 25, when Federal Highways Administration (FHWA) posted a pre-solicitation for qualified contractors with interest in repairing the landslide. The contract for this phase of work is estimated to cost between $3,000,000 and $7,000,000, and is expected to be awarded by mid-February. Final construction work will begin soon after.

The schedule of the road reconstruction will be determined by the information received in the solicitation package, but is anticipated to be complete by mid-May to early June. Newfound Gap Road will remain closed to thru traffic during the construction, but visitors are still able to access the park to Newfound Gap from the Tennessee side and to Smokemont Campground from the Cherokee entrance. 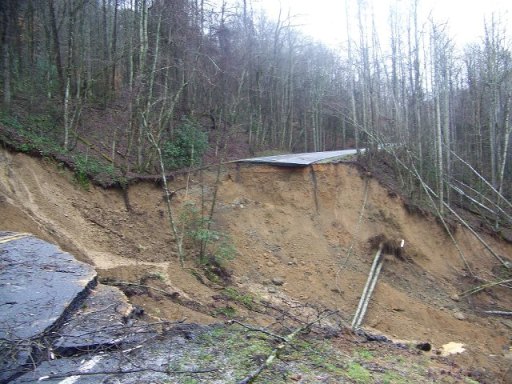 In the meantime, visitors will still have access to Newfound Gap from the Tennessee side, and will be able to travel to the Smokemont Campground from the Cherokee entrance.

The landslide occurred after a rain storm stalled out across the region. An in-park weather station near Cherokee, NC recorded 11.3 inches of rain between January 13th and January 17th.


Jeff
Hiking in the Smokies
Posted by The Smoky Mountain Hiker at 6:05 PM

I am very enthusiast to go there but can't go from a long way so it needs to be completed soon. Is it completed yet or not?