Fire management officials at Great Smoky Mountains National Park have announced plans to conduct several prescribed burns across the park this spring including areas near Wears Valley, Lynn Hollow, and Cades Cove. The burns will occur between the months of March through May as weather conditions permit.

The prescribed burn near Wears Valley will occur over a 200-acre area just inside the Park south of Wears Valley in Sevier County, TN. A local wind event canceled the burn originally scheduled for November 2012. Closures for firefighter and public safety during burn operations include Wear Cove Gap Road from the Metcalf Bottoms bridge to the Park boundary at Wear Cove Gap along with Roundtop Trail. Prescribed burn operations are expected to take 2 days. 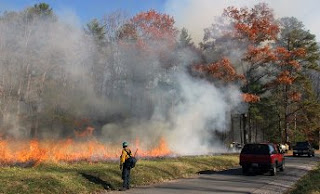 The Lynn Hollow prescribed burn will occur on park lands near Lake in the Sky and the Top of the World community in Blount County. The burn is planned for late March and will occur over a two day period as weather conditions permit. It is anticipated that residual smoke and mop-up activities could last for several days following burn operations. Temporary closures to Goldmine Trail and Cooper Road will be necessary during fire operations.

According to Fire Management Officer, Dave Loveland, "The Park conducts prescribed burns each year for a number of different objectives including hazard fuel reduction in the wildland urban interface and protection of natural resources. The use of prescribed fire helps decrease risks to life, property, and perpetuates the natural resource values for which the park was founded." The purpose of both these controlled burns is to reduce hazardous fuel accumulations in the vicinity of residential communities and to restore the diverse, yellow pine/hardwood forests.

Fire Management personnel also plan to continue controlled burning in Cades Cove early this spring as conditions permit. Since November, approximately 600 acres have been burned in the cove with another 200 acres planned.

According to Loveland, "The fields burned earlier this season look great and we have achieved all of our hazardous fuels and resource management objectives. We hope to continue and build on our earlier accomplishments."

Cades Cove Loop Road will remain open but visitors may experience brief delays due to smoke or other safety concerns as fire fighters work adjacent to roadways.


Jeff
Hiking in the Smokies
Posted by The Smoky Mountain Hiker at 9:04 AM