Knox County Commissioners voted yesterday to express support for a recent Blount County Commission resolution that opposes the backcountry camping fee in Great Smoky Mountains National Park. The Knox resolution also demands for the immediate repeal of the backcountry camping fee, and opposes the imposition of any fee for the use of the Great Smoky Mountains National Park that is not directly associated with the use of amenities or a commercial purpose. 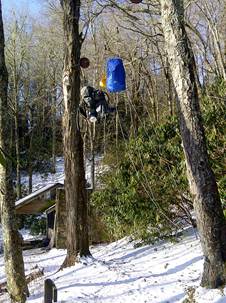 On February 13th Great Smoky Mountains National Park officials implemented a $4 per night, per person fee for anyone wishing to camp in the park's backcountry. Almost immediately after the plan was announced in July of 2011, the backcountry fee system has generated strong opposition.

Citizens groups, such as the Southern Forest Watch, oppose the fee on grounds that "backcountry camping is differentiated from front country camping in that no amenities are provided to campers other than the metal cables that are constructed to raise campers' gear and food above the level at which bears can access said gear and food".

Earlier this month the Southern Forest Watch filed a lawsuit against the fee.

The resolution passed by the Knox County Commissioners also asks that all of the counties in the State of Tennessee to join in passing the resolution, and to forward to their state delegations to ask their delegates to investigate the matter and to join in formally opposing the same fees.

So far this strategy, originally initiated by the Blount County Commission, seems to be gaining momentum. Since the February 21st vote by Blount County, similar resolutions have been passed by Knox County, Monroe County and Bradley County in Tennessee, as well as Swain County in North Carolina.


Jeff
Hiking Trails in the Smokies
Posted by The Smoky Mountain Hiker at 10:38 AM

the list is growing,
too bad it's all after the fact.

Never too late :) though such support as these resolutions would have been even better had they come before the fees were created and passed, I am glad for them and hope they will have some positive effects.

Anonymous, it's never too late. Never. It's about time that someone take a stand for what's right and good.

Glad that this blog covers the story. Knoxville media does not. National Media does. Knoxville media, with the exception of WATE is largely a propoganda machine for the Sugarlands. They avoid anything that could restrict tourist dollars flowing into Sevier county and Dollywood.