Earlier this week a 23-year-old record for the fastest self-supported thru-hike on the Appalachian Trail was broken. Matt Kirk, a 32-year-old schoolteacher from Western North Carolina (though he apparently resigned from that position in June) hiked the 2185.9 miles in 58 days, 9 hours and 38 minutes - an average of 37.4 miles per day! 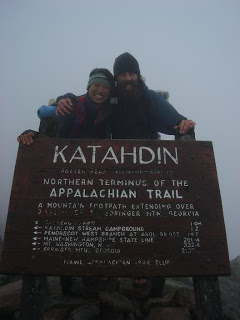 Matt began his trek from Mt. Katahdin in Maine on June 12th, and arrived at Springer Mountain in Georgia just before dusk on Wednesday, August 7th.

The previous record, held by Ward Leonard of Concord, Massachusetts, set the record for the fastest self-supported thru-hike of the Appalachian Trail in 1990, when he hiked the trail in 60.5 days.

Jennifer Pharr Davis, who holds the record for the fastest supported hike (when she hiked the trail in 46.5 days in 2011), was at Springer Mountain when Matt completed his quest. She has an excellent write-up on her blog, which includes several photos.

The photo on the right is from Matt's 2007 thru-hike. You can see more photos on his blog.


Jeff
Hiking in the Smokies
Posted by The Smoky Mountain Hiker at 9:13 AM

Matt is an amazing hiker with a larger dose of humility than most record-setters. I finished the MST the same year as Matt did (very different methods, of course) and we both spoke about the MST experience at the Carolina Mountain Club's annual dinner after that. Matt was shy about speaking and brief with his remarks, seemed he would rather be hiking than public speaking. I am very glad to hear he will be a voice for conservation.