The Annual Hawk Migration / Flock to the Rock 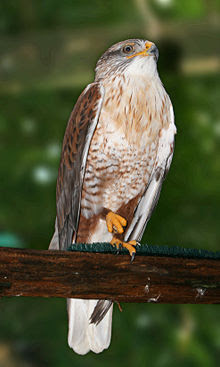 The first cold front of the year usually passes through the Smoky Mountains during the early-to-mid September time period. As the weather patterns change to cooler temperatures, Broad-winged hawks begin to make their annual migration down the Appalachian Mountain range to winter in the neo-tropics of Mexico, to as far south as Southern Brazil. For bird enthusiasts, this provides an excellent opportunity to watch the buteos as they kettle-up over the ridges and glide from one thermal to the next.

The Broad-wings are one of the first species to begin their southern migration. Flocks or “kettles” can be quite large. You may even see a few Cooper’s, Northern Harriers and Sharp-shinned hawks joining in as well.

Some of the best vantage points in the Smokies to watch the migrations are at the higher elevations of the park, such as Newfound Gap, Clingmans Dome, Look Rock, or Indian Gap.

Hawk enthusiasts also have the option of attending the "Flock to the Rock" event at Chimney Rock State Park in North Carolina. Already in its 5th year, Flock to the Rock is billed as the region’s premier fall migration birding event. The weekend of September 21st and 22nd includes bird walks guided by local experts, family nature walks, as well as workshops ranging from bird photography to hummingbirds. For more information, please click here.


Jeff
HikingintheSmokys.com
Posted by The Smoky Mountain Hiker at 7:08 AM

Laurel Park NC: 9:00 EDST, walked out the south patio deck door and looked up to see 5 to 10 large birds flying north to south. I have a large murder of crows in the area which at first I thought they were. And then I noticed the underside of their wings were lighter in color. Then I looked ahead of them further south and saw another 20 large of the same ilk riding the thermals, which crows never do. Wow what a thrill.