According to an article recently published in Wilderness & Environmental Medicine, the official Journal of the Wilderness Medical Society, 46% of Appalachian Trail hikers are unable to recognize symptoms of Lyme disease (using photographs).

In the study conducted between June of 2011 and May of 2012, 379 hikers responded to a survey given by 4 researchers at 3 geographically separate locations at or proximate to the Appalachian Trail. Ten percent, or 37 of those hikers, stated that they had been diagnosed with Lyme disease as a result of hiking. 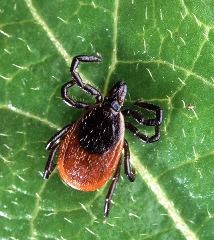 Lyme disease is an infectious disease that's transmitted to humans through the bite of infected ticks. Early symptoms of the disease may include fever, headache, and fatigue. A rash occurs in 70–80% of infected persons at the site of the tick bite, after a delay of 3–30 days (average is about 7 days), and may or may not appear as the well-publicized bull's-eye (erythema migrans). The rash is only rarely painful or itchy, although it may be warm to the touch. Approximately 20–30% of infected persons do not experience a rash. Left untreated, later symptoms may involve the joints, heart, and central nervous system. In most cases, the infection and its symptoms are eliminated by antibiotics, especially if the illness is treated early. Delayed or inadequate treatment can lead to more serious symptoms, which can be disabling and difficult to treat.

The disease has been reported in all states with the exception of Montana. However, 99% of all reported cases are confined to five geographic areas: New England, Mid-Atlantic, East-North Central, South Atlantic, and West North-Central.

The study (abstract) warns that with nearly 2,500 Appalachian Trail hikers entering the endemic area for as long as 6 months, exposure to the disease is likely.

The CDC recommends wearing protective clothing, including a hat, long-sleeved shirts and long trousers tucked into socks or boots. Light-colored clothing makes the tick more easily visible before it attaches itself. People should also use special care in handling and allowing outdoor pets inside homes because they can bring ticks into the house.

After returning from a hike, or any area where you might have been exposed, closely check your skin and clothes for ticks. Immediately remove them from your body using fine-tipped tweezers. Grasp the tick firmly and as close to your skin as possible, and then pull the tick's body away from your skin with a steady motion. Make sure to clean the area with soap and water. Removing infected ticks within 24 hours reduces your risk of being infected with the Lyme disease bacterium.