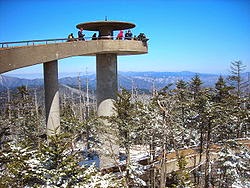 “Great Smoky Mountains National Park remains the most visited national park in the nation and we are pleased to be the stewards of this national park that welcomes so many visitors from across the country and around the world,” said Acting Superintendent Cindy MacLeod. “The Smokies truly are ‘great’ in so many ways and we are thrilled that the park offers unique experiences that bring visitors back year after year.”

The 2013 economic benefit figures are slightly lower than the 2012 results which reported that visitors spent $741 million in local communities. The 16-day government shutdown in October 2013 accounted for most of the decline in park visitation and spending. The authors also cited inflation adjustments for differences between visitation and visitor spending, jobs supported, and overall effect on the U.S. economy.

The peer-reviewed visitor spending analysis was conducted by U.S. Geological Survey economists Catherine Cullinane Thomas and Christopher Huber and Lynne Koontz for the National Park Service. The report shows $14.6 billion of direct spending by 273.6 million park visitors in communities within 60 miles of a national park. This spending supported more than 237,000 jobs nationally, with more than 197,000 jobs found in these gateway communities, and had a cumulative benefit to the U.S. economy of $26.5 billion.

To download the report, please click here. The report includes information for visitor spending at individual parks and by state.

I think that the NPS should come clean about how many of the 9 million visitors ever leave their cars. Reason being, if only 69000 of those 9 million are overnight backcountry visitors, then it begs the question as to how many folks are NPS visitors or casino visitors or Dollywood visitors who have to use Newfound Gap Road. It sounds good to have such a high statistic but that road is a main thoroughfare and folks have little option if travelling between NC and TN.

John - totally agree. Same goes with the Blue Ridge Parkway, and likely others...