Volunteers Donate More than 200,000 Hours in 2014 to Maintaining the Appalachian Trail

The Appalachian Trail Conservancy (ATC) is pleased to announce that for fiscal year 2014, 5,617 volunteers reported 241,936 hours to maintaining and protecting the Appalachian Trail (A.T.) for hikers to use. Since the ATC began collecting reports in 1983, individuals have contributed more than 5 million hours to the A.T., resulting in a volunteer network that is recognized worldwide. 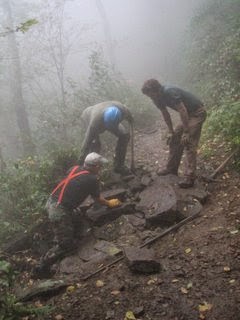 The number of hours reported, which is the second highest since 1983, reveals a loyal commitment to the Trail despite a government shutdown in October 2013 that resulted in volunteers being unable to work on National Park Service or U.S. Forest Service lands. Despite this sequestration, volunteers donated time equivalent to what is completed by 116 full-time workers and contributed to a wide variety of projects, including maintaining the A.T. corridor, monitoring and removing invasive species, supporting teachers in the Trail to Every Classroom (TTEC) program and assisting A.T. Communities near the Trail.

ATC volunteers represent 31 A.T. Maintaining Clubs and Trail Crews; Visitor Center and regional office volunteers; and participants in additional ATC programs, such as TTEC and the Appalachian Trail Community™ program. Though Trail maintainers are perhaps the most visible, volunteers also participate in many other activities, from community outreach to local, regional and Trail-wide management efforts.

“The Appalachian Trail Conservancy exists because of the generosity, talents and support of our volunteers – they are the very soul of the Appalachian Trail,” said Ron Tipton, executive director of the ATC. “The impressive number of volunteer hours reported for fiscal year 2014 illustrates a continued dedication to the preservation and management of the Trail.”