The following is an adaptation from my book, Ramble On: A History of Hiking:

Almost immediately after Glacier was established as a national park, Louis W. Hill, president of the Great Northern Railway, began building a series of hotels, chalets and tent camps throughout the park. The buildings were modeled on traditional Swiss architecture, and were part of Hill's strategy to portray Glacier as the "American Alps" or "America's Switzerland." The accommodations would in-turn help the railway promote tourism to the new national park, while at the same time promote their rail line as the primary mode of travel to the park. This would also allow them to compete against their chief rivals; the Canadian Pacific Railway and the Northern Pacific Railway, who were already transporting tourists to Banff and Yellowstone. 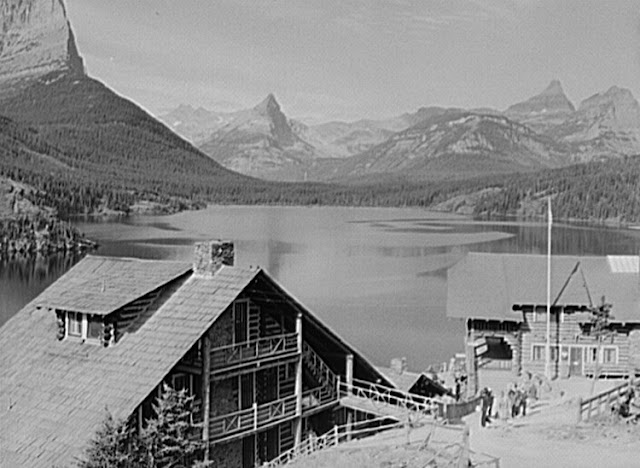 The Belton Chalet in West Glacier, and the Glacier Park Lodge in East Glacier Park were the first two hotels to be constructed by Great Northern. Both acted as gateways from railroad depots to the interior of the park. Between 1910 and 1915 the railway also constructed eight Swiss-style backcountry chalet complexes, each connected by a network of trails. The complexes were strategically located at Two Medicine Lake, Cut Bank, St. Mary, Sun Point, Granite Park, Many Glacier, Gunsight Lake and Sperry Glacier. Tent camps were also established at Red Eagle Lake, Cosley Lake, Fifty Mountain and Goat Haunt. The chalet and tent camps were located roughly 10-18 miles apart. During their prime most of the chalet camps could host between 100 and 150 guests per night. Hill would explain to newspaper reporters that the “lodges would be located only far enough apart so that the man on foot even could make the trip and obtain sleeping accommodations,” and that “hotel accommodations of a more prestigious type or tents for the most modest could also be furnished.” 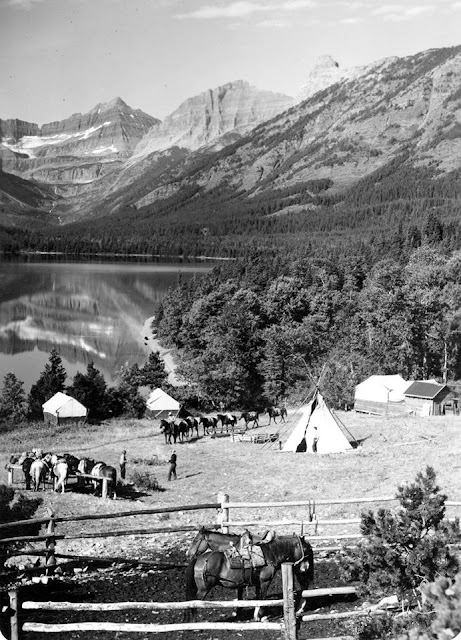 As construction on the new chalets progressed through the early 1910s, the railway also constructed the trails that would connect each of them by foot or horse travel. Because of a lack of federal funds, the Great Northern Railway assumed financial responsibility for all trail construction during this time period, but was eventually reimbursed as funding became available. Some of the earliest trails developed by the railway included Swiftcurrent Pass, Gunsight Pass, Mt. Henry, Red Gap Pass, Gable Pass, Triple Divide Pass, Piegan Pass, Pitamakan Pass and the St. Mary Lake trails. Many of these early trails were routed along Indian paths, prospector trails or old game trails. Great Northern would continue to improve or construct new trails within the park into the early 1920s. As the network of trails expanded, organized tours by horse concessionaires began to emerge. In 1915 the Park Saddle Horse Company became the sole concessionaire for the park, and began organizing a series of guided tours that utilized the existing network of chalets and trails. This included the North Circle, South Circle and Inside Trail trips, which encompassed roughly 163 miles of trails, each of which is now on the National Register of Historic Places. The company also offered the Logan Pass Triangle Trail trip, which traversed across the heart of the park utilizing routes from the other tours, as well as the now abandoned Logan Pass Trail, which I discussed in detail yesterday. The concessionaire offered a variety of options, from half-day excursions to extended trips lasting up to two weeks. Most of the so-called circle tours, however, lasted between three and five days. During the 1920 season the company charged roughly $4.00 per person, per day to take one of its saddle-horse tours. 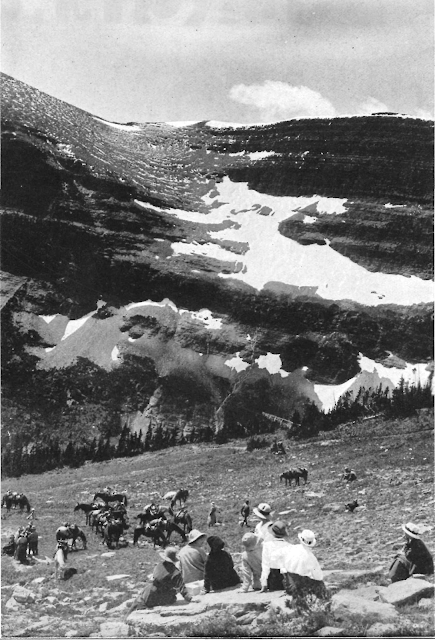 Although there were several variations of each of these trips, depending on the number of days tourists chose, the direction they wanted to take, as well as the evolution of routes over time, these are the routes described on the National Register of Historic Places Registration Form and various park brochures:

Logan Pass Triangle trip: Three-day trip made as follows: Many Glacier Hotel to Granite Park Chalets via Swiftcurrent Pass, thence along the west side of the Garden Wall through Logan Pass to Going-to-the-Sun Chalets, thence back to Many Glacier Hotel via Glacial Meadows and Piegan Pass. Rate for guide and horses, $12.50 per person. Going-to-the-Sun Chalets is also a point of departure for this trip.

Inside Trail: Guide and horses may be obtained for a five-day trip over the inside trail from Glacier Park Hotel, via Two Medicine Chalets, thence via Mount Morgan Pass (now known as Pitamakan Pass) to Cut Bank Chalets, thence via Triple Divide, Red Eagle Lake, to St. Mary Chalets, thence via boat across St. Mary Lake to Going-to-the-Sun Chalets, thence via Piegan Pass to Many Glacier Hotel, at the rate of $18 for each person, including boat fare, if five or more make the trip. This trip may be made in either direction. 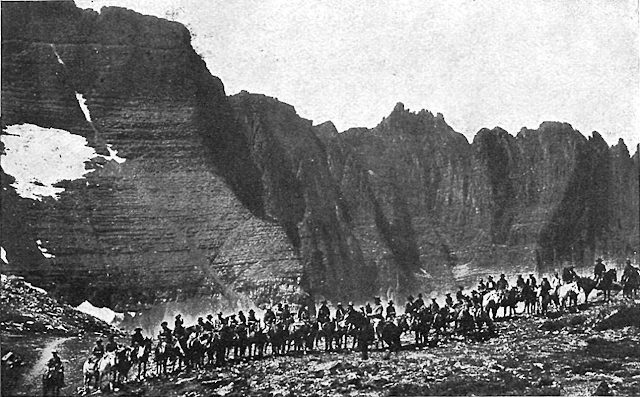 The park visitors that took these tours were “guided by ‘cowboys,’ lunched near glacial lakes and then dined in comfort on Chinese linen and blue willow china”. Park rules dictated that the Park Saddle Horse Company had to furnish at least one guide for each ten tourists on a trip. Parties could reach as large as 180 people and 200 horses. It’s estimated that the concessionaire used more than 1000 horses during its peak, with at least one source estimating as many as 1500 head of horses. The 1922 park brochure bragged that there were "more saddle horses used in Glacier than in any other similar recreational area in the world". From everything I’ve read that record has never been surpassed.

The saddle-horse tours were the dominant method of seeing the park until the Going-to-the-Sun Road was completed in 1933. Although the tours continued for another ten seasons, they came to a permanent end after the 1942 season when America became fully involved in World War II.