The Routing of the Appalachian Trail through the Great Smoky Mountains

The following is an adaptation from my book, Ramble On: A History of Hiking:

On October 29, 1929, a day after losing almost 13% of its total market value, the Dow Jones Industrial Average plunged another 12%. That day, now infamously known as Black Tuesday, marked the beginning of the Great Depression. To help alleviate the suffering of millions of Americans, President Franklin D. Roosevelt initiated several social welfare programs, including the Civilian Conservation Corps (CCC), which would employ millions of young men to help provide their families with much needed cash. The program employed unmarried men between the ages of 18 and 25 (later expanded to 17-28). In addition to food, shelter and clothing, the corps enrollees were paid $30 per month, but were required to send $25 back to their families. Operating from 1933 to 1942, the CCC employed roughly 3 million young men nationwide. Their accomplishments during this time period were staggering. They planted roughly 3 billion trees, developed or improved 800 state parks, developed 52,000 acres of public campgrounds, constructed 125,000 miles of forest roads, erected 3470 fire towers, spent millions of man-days fighting wildfires, stocked lakes and streams with fish, helped with erosion control on 20 million acres, and constructed more than 28,000 miles of foot trails, the vast majority of which were constructed in national forests.

The CCC was also largely responsible for the construction of the Appalachian Trail through the Great Smoky Mountains. The footpath, which now runs for 2190 miles between Maine and Georgia, was originally conceived by Benton MacKaye, a Massachusetts regional planner and forester for the United States Forest Service. His idea for a continuous wilderness path was originally proposed in an October 1921 article in the Journal of the American Institute of Architects, entitled, "An Appalachian Trail: A Project in Regional Planning." MacKaye saw the trail as not only a way of providing leisure, enjoyment and an opportunity to “study the dynamic forces of nature,” but also as way for modern urbanites “to catch a breath” and gain “relief from the various shackles of commercial civilization.” 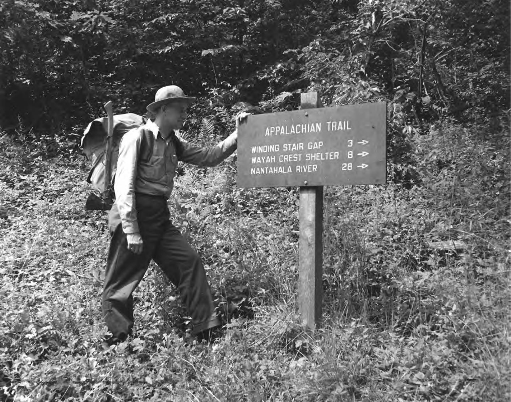 Work began on the trail in 1923, with the greatest progress taking place in New England over the first several years. In 1929 the Appalachian Trail Conference (now the Appalachian Trail Conservancy) sent Roy Ozmer to scout a route through the southern states. His original plan called for the trail to enter the Smokies at Davenport Gap in the northeast corner of the park, and then traverse across the eastern highlands of the park. At Silers Bald his projected route turned south to descend along the Forney Creek drainage before exiting the park and entering the Nantahala Mountains. However, during the trip, Horace Kephart, an outdoor author and a strong advocate for a national park in the Smokies, convinced Ozmer to route the trail across the entire crest of the Great Smoky Mountains. As a result of Kephart‘s influence the original route of the Appalachian Trail traveled all the way across Gregory Bald to exit the park at Deals Gap. After Fontana Dam was constructed in the 1940s, however, the trail was rerouted to turn south at Doe Knob and cross over the new dam. Below is snippet of a park map from 1940 (click here for the full map) showing the original route: 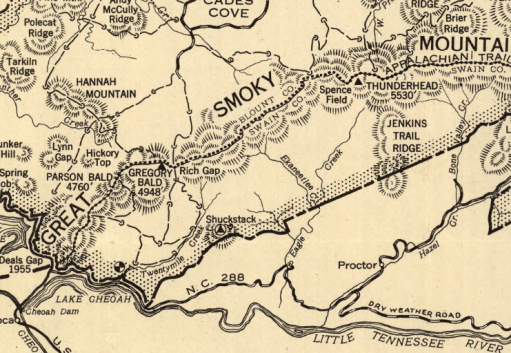 Although hikers were already exploring the Great Smoky Mountain highlands as early as the early 1900s, it’s believed that the first continuous hike across the entire crest of the Smokies took place in August of 1932 when nine members of the Smoky Mountains Hiking Club set-off from Davenport Gap. Included among this group of explorers was Harvey Broome, president of the club and one of the co-founders of The Wilderness Society, as well as Carlos Campbell, an avid hiker, founding member of the hiking club, and secretary of the Great Smoky Mountains Conservation Association. According to Campbell’s memoir, and a taped interview conducted in 1975, their 72-mile trek across the future park took nine days to complete, much of it across rugged terrain without the benefit of a trail. Along the way they ran out of food and water on several occasions, and had to rely on livestock herders for help. After completing their hike and reaching Deals Gap the hungry and scraggly-looking bunch hitched a ride back to Maryville. Upon arrival they made a beeline to a drugstore where each of them devoured a quart of ice cream. Obviously not much has changed over the years. It’s been a long tradition for thru-hikers to stop and consume a half gallon of ice cream at the Pine Grove Furnace General Store near the halfway point on the Appalachian Trail.

Members of both the Smoky Mountains Hiking Club and the Carolina Mountain Club were instrumental in making the Appalachian Trail through the Smokies a reality. Members of both clubs scouted and physically marked the route. George Masa, a distinguished photographer and member of the Carolina Mountain Club, took it upon himself to photograph and draw detailed maps of the terrain along the proposed route. Club members also rolled measuring wheels to calculate distances along the route, such as the one in the photo below: 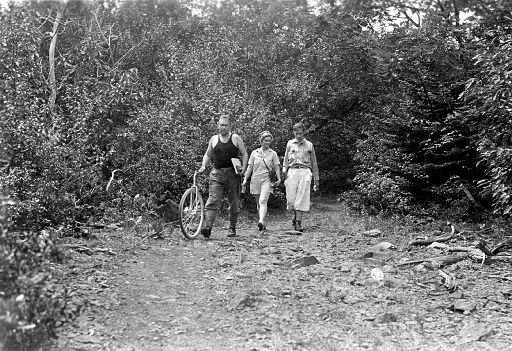 Though the two hiking clubs were heavily involved with scouting and blazing the footpath, it was the responsibility of the federal government for its construction. Although national park crews built a few miles, the vast majority of the route through the Smokies was built by the Civilian Conservation Corps, including the original trail shelters. 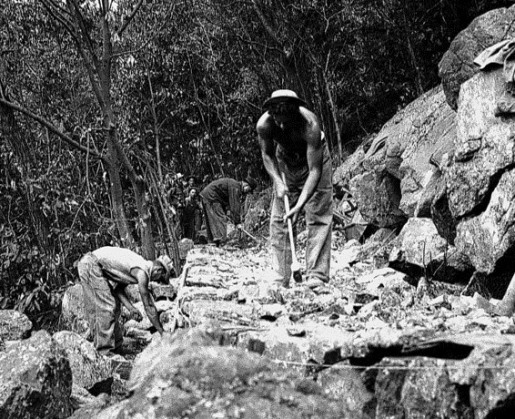 By 1936 the CCC had completed the trail through the park, and in August of the following year a CCC crew had connected a two-mile stretch along the ridge between Spaulding and Sugarloaf Mountains in Maine, thus completing the final link in the entire length of the Appalachian Trail. At that time the footpath extended for roughly 2025 miles, from Mount Oglethorpe in Georgia to Mount Katahdin in Maine. However, the Appalachian Trail Conservancy website notes that the route is constantly changing, and estimates that 99% of it has been rebuilt or relocated since its initial completion, including the reroute to its current southern terminus at Springer Mountain. The relocation work over the years has resulted in a trail that now tracks across lands that offer it much more protection, thus ensuring its long-term sustainability. The Appalachian Trail Conservancy notes that 99% of the trail now passes through publicly owned lands, including six national park units, eight national forests, and numerous state parks and forests.