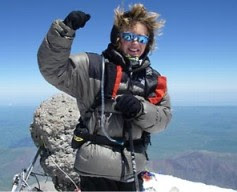 There's a brief posting on Jordan Romero's website stating that the 13-year old has successfully reached the summit of Mount Everest, thus becoming the youngest person to reach the top of the world.

Here's what was posted on his blog earlier today:

The team just called in and confirmed that they are standing on top of Mt. Everest - the highest peak in the world. Their dreams have now come true. Everyone sounded unbelievably happy. They also thanked everyone who supported them and encouraged them throughout their journey.

I’m sure we’ll hear more from them soon!

A subsequent posting on the blog also states that the Team’s SPOT GPS is indicating that the team has arrived safely back at Camp 2 (24,750 ft) roughly 26 hours after reaching the summit.

For Jordan, Mt. Everest just became the sixth of the "Seven Summits" - the highest points on each continent - that he has now summited. He hopes to become the youngest to reach all "Seven Summits" by tackling Mt. Vinson in the Antarctic later this year.