The fact remains that the first American go at Everest will be an event. If we succeed, it will be a feather in our cap, a booster to our prestige, a refutation beyond argument of our detractor’s taunt that we are a nation gone soft and gutless. If we do not, we will at least have entered the arena, joined the rest of the world in one of its great enterprises, abandoned our “isolationism” in mountaineering, as we have long since in other fields.

It is still there. It always will be. And it is time we had a look for ourselves.

Today, May 1st, marks the 50th anniversary of the first ascent of Mt. Everest by American climbers. To help celebrate this important achievement, a new book about this incredible feat was released today. 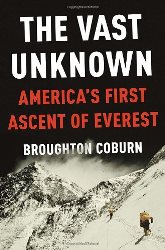 The Vast Unknown recounts the story of a group of ragtag American climbers who made an improbable and daring attempt at climbing history. Although the world's tallest mountain had already been climbed nine times (or was it only six - there is much debate and controversy as to whether members of the 1960 Chinese expedition actually reached the summit), and numerous attempts had been made in the preceding decades, the Americans would become the first to ascend the unexplored and extremely formidable West Ridge route.

New York Times bestselling author Broughton Coburn re-tells the story of the historic climb through the backdrop of the Cold War and the space race. He also provides insight on the early days of climbing in America, where "the Tetons were the nursery for an embryonic clan of innovative and spirited American mountaineers".

It wasn't entirely about climbing the mountain, however. There was also a scientific element to the expedition. Psychologists and sociologists were brought along to conduct experiments for NASA, the Navy and the National Science Foundation. A glaciologist was also brought on board to study the Khumbu Icefall.

In subsequent years some members of the expedition would play a major role in a little-known espionage mission in the Himalayas. Coburn tells the story of the mission and the team of climbers that were selected by the CIA to plant a surveillance device on a neighboring peak, Nanda Devi, in order to spy into China where Defense Intelligence would monitor nuclear missile testing.

All in all The Vast Unknown is an excellent read, even if you're not a climber. From the assembly of the expedition team, to the logistics of moving 23 tons of gear from Seattle to India to Kathmandu, and finally onto Everest Base Camp; and from the triumph of Jim Whittaker becoming the first American to summit Everest, to the harrowing feat of conquering the West Ridge, as well the incredible story of survival - against all odds - during the descent from the peak, this book is an exciting and engaging look at a pivotal point in American climbing history.

The following is a short video that includes several clips from the 1963 expedition:


For more information on The Vast Unknown, or to purchase, please click here.

Jeff
Hiking in the Smokies
Posted by The Smoky Mountain Hiker at 7:30 AM