Who Conceived The Concept of "National Parks"? 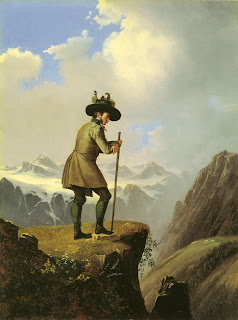 Though it's a well-known fact that Yellowstone was set aside as the world's first national park in 1872, who conceived the idea that tracts of land should be set aside for the general public? Yellowstone's establishment as a national park can be traced back to President Abraham Lincoln when he signed a bill granting the Yosemite Valley and the “Mariposa Big Tree Grove” to the state of California, “upon the express conditions that the premises shall be held for public use, resort, and recreation” in perpetuity. Although this legislation was a precursor to the concept of national parks, the Yosemite Grant Act of 1864 wasn't a new idea. Henry David Thoreau made calls for the preservation of wilderness at least a decade earlier. In his essay, Walking, he made a plea for preserving the West before it would inevitably be exploited and despoiled by human migration, asserting that “The West of which I speak is but another name for the Wild; and what I have been preparing to say is, that in Wildness is the preservation of the world.” In The Maine Woods he called for the establishment of national preserves, asking, “Why should not we…..have our national preserves…..not for idle sport or food, but for inspiration and our own true re-creation?"

However, even Thoreau's call for a national preserve wasn't an original idea. The joint publication of Lyrical Ballads by William Wordsworth and Samuel Taylor Coleridge in 1798 is widely recognized as the birth of Romanticism in English literature. In addition to being close friends, both poets held nature in high regard, and both enjoyed exploring the Lake District, a mountainous region in northwestern England. During his early adult years Wordsworth in particular spent many of his holiday vacations on walking tours, several of which included extended tours of the Lake District. In 1810 he published A Guide through the District of the Lakes, which likely contains the world’s first written call for a national park. In the conclusion of the book Wordsworth argued that the Lake District should be considered “a sort of national property, in which every man has a right and interest who has an eye to perceive and a heart to enjoy.”

If you would like to learn more about how preservationists impacted the sport of hiking, my new book explains the crucial roles played by Wordsworth, Thoreau, Muir, Roosevelt and others. Ramble On: A History of Hiking is now available on Amazon: https://www.amazon.com/dp/1725036266/