The Cascade Canyon Trail in Grand Teton National Park is often rated as one of the best trails in the United States. If you’ve ever had the opportunity to hike this gem you would probably concur.

Having such notoriety bestowed upon it, the trail is naturally going to be one of the most popular hiking destinations in the park. Our hike in September of 2001 was no exception. In fact, this hike is probably the most memorable one we’ve ever had – and that’s not just due to the majestic mountain scenery.

Roughly a mile-and-a-half from the boat dock we caught up with a large group of hikers making a bit of a commotion. Based on their accents we made the assumption they were tourists from Germany. The “leader” of this group, a muscular guy without a shirt and wearing a bandana, whom we appropriately nicknamed “Rambo”, was banging the ground with a large stick. He and his fellow travelers were all yelling at a young black bear walking along the trail just in front of them.

The absurd part of the story is that the bear really didn’t care how loud these people yelled. He just continued strolling down the trail at his own leisurely pace. With the Germans in front of us, we literally followed the bear for nearly a mile before he decided he'd had enough and meandered off into the woods. We took this opportunity to double-time it in order to get away from this loud and obnoxious group.

Don’t try this at home! I never would’ve gotten this close had there not been so many other people around: 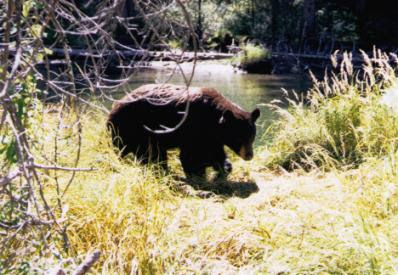 Later on, near the Forks of Cascade Canyon, we came across another commotion. This time there were several people off the side of the trail watching two bull moose engage in a turf battle. Naturally we wanted to check out the struggle ourselves. However, just as we arrived, the smaller moose waived the white flag, licked his wounds and wandered out of the danger zone. Most of the people continued to stick around to snap a few more photos of the victor. But as the group grew in size, and people tried to get a little closer, the moose became visibly agitated. Giving us fair warning, he began thrashing his antlers in the brush before suddenly rushing across the creek towards us. In an instant everyone scattered to the wind. Fortunately, it was only a bluff charge that ended just as quickly as it started, but I guarantee that everyone’s heart was racing for a few seconds. That ended the photo shoot.

We continued on to the forks. On our return, I was able to get a shot of the moose with no one else around. 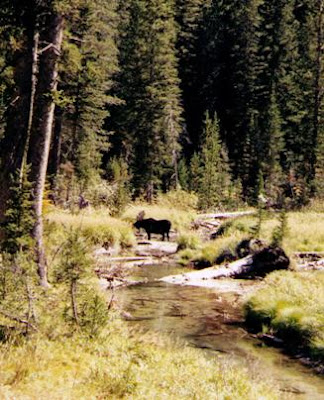 The hike to the forks is roughly 6.5 miles one-way. However, you can subtract two miles each way by taking the shuttle boat across Jenny Lake.

Many people prefer to end their hike at Inspiration Point, satisfied with the spectacular panoramic views of Jenny Lake and Jackson Hole below: 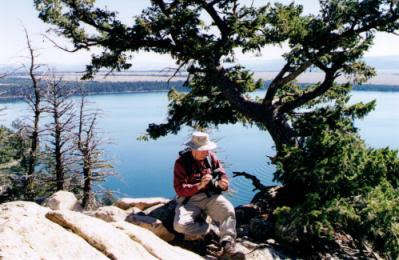 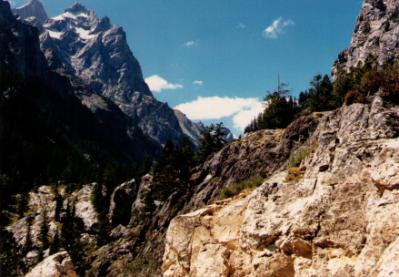 Cascade Creek and Mt. Owen a mile above: 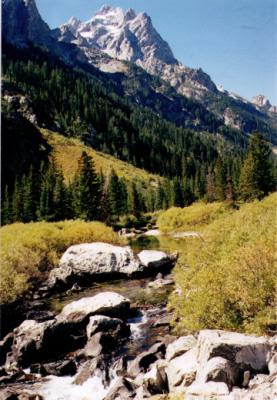 From Jenny Lake to the Forks of Cascade Canyon, the trail gains a little more than 1000 feet. Most of that elevation gain occurs in the first mile or so (above Jenny Lake). Just beyond Inspiration Point, the trail levels out as it passes through the U-shaped, glacially sculpted Cascade Canyon. The trail offers close-up views of Grand Teton, Mt. Owen and Teewinot Mountain.

Parting shot: this photo was taken the morning we left for home. We were extremely lucky to come across this vantage point near Moran Junction just as a cloud bank was passing mid-way below the summit of Mount Moran. This is one of my all-time favorite shots: 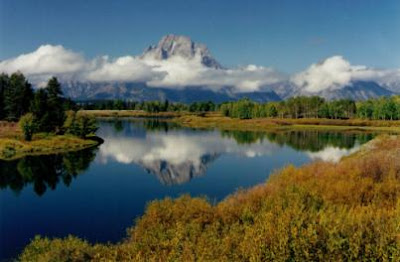 Must-Do Hikes in Yellowstone and the Grand Tetons:

Posted by The Smoky Mountain Hiker at 7:16 AM

I hiked this trail this past June. It was the most beautiful hike I have ever been on.

When we hiked it we started out on dry ground, and just past Inspiration point entered the snow line. It was fantastic. No bears or moose, but numerous marmots.

JP - yes, we saw a ton of marmots and pikas as well.

I've been to the Teton three times - all three times have been in late summer. I really want to see the mountains in the winter some day.

My friend and I hope hike to the Cascade Canyon Fork in September, which I believe is the same time you took this hike. How long did it take you to hike the 13-mile round trip? When would be the best time in the morning to leave for the hike? We are both new to hiking (although I am far from out of shape as I am training for a full marathon), but I worry that if we wait for the first boat shuttle at 10 am, we won't have enough time to get to the fork and get back to our car. Any advice would be appreciated. Thanks.

Kate - We took that shuttle as well - don't remember if we were on the first one or not, but we had plenty of time to complete. If you're training for a marathon I don't think you'll have any problems finishing this in a timely manner either. (yes, we hikes this in September).

Other than the beginning, this hike is pretty much flat. For comparisons, I usually walk at about a 16 or 17-minute mile pace when on roads. Hiking on flat terrain - probably about 25-minute miles. You could probably straight hike this in about 6.5 hours. Add in snack breaks and sight-seeing/photos - and I would estimate this could easily be done in 8 hours.

Okay - I just checked the schedule - I see your concerns! Based on my estimates (if those are close to what you think you might expect), I think you'll be cutting it real close. It seems they were open later than 4 when we last hiked this in 2001.

You may want to consider starting at day break, and then plan on catching the boat on the way back.