In case you missed it the 1st time: America's Best Idea

The National Park Service announced this morning that the Ken Burns’ series, “The National Parks: America’s Best Idea,” will return for an encore broadcast on PBS this month, with the first episode airing on January 27th. It will then appear on consecutive Wednesdays through March 3rd. 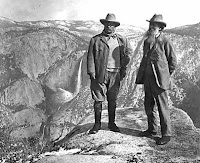 “The National Parks” had a huge online presence as well. Its web site was the most visited program page on PBS.org during the week of broadcast and had 544,000 unique visitors between September 1st and October 31st, with 2.5 million page views in the same period. The program’s Facebook fan page boasted more than 50,000 fans by the time of the broadcast. There were more than 185,000 streams of the episodes during the two weeks they were available, making it the most-watched program on the PBS Video Portal during the week of broadcast, with viewers watching on average at least 55 minutes of the full episodes online. In comparison, the average online viewer watches only six minutes per video of content on Hulu.

Since its release on October 6, the series’ DVD set has been a best-seller at many national retailers. “The National Parks” also launched PBS’ first general-audience iPhone application, which highlighted the series, behind-the-scenes information and more.