Smoky Scout admits to steroids use

In a shocking revelation that's rocking the hiking community today, Smoky Scout has publicly admitted to using steroids during her quest to hike all 800+ miles of trails in the Great Smoky Mountains. 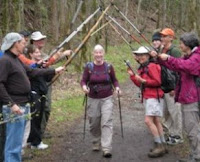 Last year during her Girl Scout Challenge to raise money for the Girl Scouts, Sharon (a.k.a. Smoky Scout) began using steroids in order to boost her performance and endurance on the trail.

Although steroids as of now aren't considered to be a banned substance for hikers, officials of the 900 Miler Club are considering stripping Smoky Scout of her club membership. In a statement released earlier today, Smoky Scout said that she intends to appeal this decision immediately. She is also asking for mercy on humanitarian grounds from 900 Miler Club officials, and is asking that they simply put an asterisk next to her name in the records book.

Rightly so, Smoky Scout points out that there is no way of knowing how many other hikers have resorted to steroids and other performance-enhancing drugs while hiking all of the trails in the Smokies.

During her interview on the Oprah Show this morning, Sharon revealed for the first time that she was approached by an undercover ranger late last February while hiking on the Gregory Bald Trail with two other companions. The ranger stated that he was acting on an anonymous tip that she was using steroids during her quest to hike all 800+ trails in the Smokies and needed a urine sample to prove otherwise.

In typical fashion with most Oprah interviews, Sharon began crying at this point in the interview as she described what happened next. As you might expect, this would be quite an embarrassing situation. However, Smoky Scout wasn't embarrassed due to fear of mockery or shame from her two hiking companions. No, as you see, there aren't many trees up on Gregory Bald. Her concern was over where to conduct her test in such an open setting.

After a lot of sobbing and a few mumbled words we couldn't really understand, Sharon blurted out to Oprah; "For the love of God, it's not like I'm riding in the Tour de France!"

True. But fairness is fairness.

Dale Ditmanson, Superintendent of the Great Smoky Mountains National Park, said in a press release this morning that he was shocked and dismayed that hikers are now resorting to performance-enhancing drugs. "Hiking was the last major sport to be plagued by steroid use. I guess it was only a matter of time before it became a reality in this great sport of ours." He hopes this is just an outlier and that officials can nip this problem in the bud.

Personally, my only hope is that this incident doesn't taint our chances of hiking being added to the 2016 Olympics. If the hiking community is committed to seeing our sport elevated to Olympic status, I suggest that we come together and start doing random drug testing at all the major trailheads on federal lands, including all trails in our national parks. I agree with Mr. Ditmanson, we need to clean this sport up once and for all.

I have always wanted to be on Oprah!

I am shocked and appalled!! Is NOTHING sacred???

I thought it was real until you got to the crying part. Sharon would never cry on the "job" - OK maybe to get on Oprah. If that's what it takes to elevate hiking to a spectator sport, then "Cry, Sharon, Cry"

HAHAHA! Hiking as an Olympic Sport... 'Cause it's just so competitive. Good joke.

oh, dear God, you REALLY got me. I was thinking that some of you hikers had REALLY gone off the deep end, condemning someone for taking steroids. and then as I got to the very bottom, I started thinking that hey, maybe it's an April Fool's prank column; but it seemed so REAL the way it was written. I wasn't sure. I'm glad to have my suspicions confirmed in the comments that it was just an April Fool's joke.