More details were released by Yellowstone National Park concerning the hiker that was mauled by a grizzly bear on Wednesday.

The victim of the attack was a 57-year-old man from Torrence, California.

Brian Matayoshi, and his wife Marylyn, were hiking Wednesday morning on the Wapiti Lake Trail, which is located off the South Rim Drive, south of Canyon Village and east of the park’s Grand Loop Road.

The couple was hiking west back toward their vehicle. At approximately 11:00 a.m., at a point about a mile and a half from the trailhead, they walked out of a forested area into an open meadow. It appears that the couple spotted a bear approximately 100 yards away and then began walking away from the bear. When they turned around to look, they reportedly saw the female grizzly running down the trail at them. The couple began running, but the bear caught up with them, attacking Mr. Matayoshi. The bear then went over to Mrs. Matayoshi, who had fallen to the ground nearby. The bear bit her daypack, lifting her from the ground and then dropping her. She remained still and the bear left the area.

Mrs. Matayoshi then walked back toward the meadow and attempted, without success, to call 911 on her cell phone. She began to shout for help and was heard by a distant group of hikers who were able to contact 911 by cell phone. Two rangers already in the area on backcountry patrol were contacted by the park Communications Center by radio and responded to the scene of the incident.

Mr. Matayoshi received multiple bite and clawing injuries, and was dead when rangers arrived at the scene at approximately 11:30 a.m. 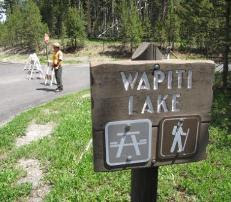 Rangers immediately closed the hiking trails in the area. A subsequent helicopter patrol of the area failed to turn up any other hikers or backpackers. This small section of the park’s backcountry is expected to remain closed for several days.

The initial investigation suggests the sow grizzly acted in a purely defensive nature to protect her cubs. This female bear is not tagged or collared, and does not apparently have a history of aggression or human interaction. Typically, the National Park Service does not trap, relocate, or kill a bear under those circumstances. A Board of Review which will include interagency experts will be convened to review the incident.

Bear attacks are extremely rare. No one was hurt by a bear in Yellowstone in 2010. This is the first time a human has been killed by a bear in the park since 1986.

Park visitors are encouraged to stay on designated trails, hike in groups of three or more people, and be alert for bears and make noise in blind spots. Visitors are also encouraged to consider carrying bear pepper spray, which has been shown to be highly successful in stopping aggressive behavior in bears. The Matayoshis were not carrying pepper spray.

Obviously I'm not a bear expert, but it appears that the couple made the mistake of running away. Had they stood their ground the outcome of this encounter may have been different. The mother bear may have only been bluff charging to protect her cubs. Moreover, had the couple been carrying bear spray they may have been able to defend themselves from the attack.

Based on the reports released by the park, it appears the bear acted completely naturally during this encounter. But will this incident change her and her cubs view of humans as prey in the future? Will this family become a problem for other Yellowstone visitors in the future? I can't help but think that if any of these bears attack anyone in the future, park officials will surely be blamed for not taking some type of action.


Jeff
HikingintheSmokys.com
Posted by The Smoky Mountain Hiker at 8:14 AM

Such a sad story, on all accounts (the family, the park officials, the future of the bear's family) Just a bad situation overall.