Don't urinate on the trails in Olympic National Park

Visitors to Olympic National Park are being advised not to pee near trails, or face the risk of being attacked by mountain goats.

This warning stems from a fatal goring that occurred in the park last fall. Witnesses at the time of the attack described an aggressive male mountain goat, weighing more than 350 pounds, that approached, followed and fatally gored a Port Angeles man while he was hiking last October. 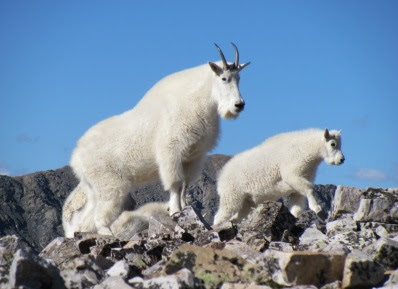 The warning is a new measure park officials are instituting as part of their revised Mountain Goat Action Plan. Biologists point out that hikers that urinate along trails are turning the pathways into "long, linear salt licks", which attracts the mountain goats. To avoid potential conflicts, park officials are advising hikers and campers to urinate at least 50 yards from a trail or campsite.

* Goat does not retreat when comes in sight of people, lets people approach within 150 feet.

* Goat approaches and follows people on trails or at camp or rest sites.

* Goat aggressively seeks out areas where humans urinate and consumes soil and vegetation where human urine is deposited.

* Goat displays aggressive postures or behavior to people when encountered on or off trail.

I think this advice should be taken by anyone who hikes out west, not just in Olympic National Park. Long time readers of this blog may recall my run-in with a mountain goat family on Quandary Peak in Colorado last year. Looking back now, these goats clearly demonstrated "unacceptable mountain goat behavior".


Jeff
HikingintheSmokys.com
Posted by The Smoky Mountain Hiker at 7:17 AM