Hiker killed by mountain goat versus my recent experience

Most of you have probably already heard the story about the hiker that was fatally gored by a mountain goat in Olympic National Park last weekend.

After reading the details that have emerged this week, I couldn’t help but relate this to my own recent experience on Quandary Peak in Colorado.

Here's a quick recap of the incident in Olympic:

Last Saturday 63-year-old Robert Boardman of Port Angeles, WA was hiking with his wife and a friend on the Switchback Trail in the national park. They stopped for lunch at an overlook when a goat appeared and began acting aggressively toward them. After chasing him for a bit, the ram gored Boardman in the thigh, then stood over him as he lay bleeding to death, staring at people trying to help.

That goat was killed shortly thereafter, but rangers and biologists continue to investigate the area for other signs of aggressive goat behavior.

I pointed out in my blog posting from a couple of weeks ago that the highlight of our hike up Quandary was seeing a family of mountain goats. It was the closest I’ve ever been to a mountain goat. However, the story of Boardman’s death hit a little close to home as the goats we encountered appeared to express a degree of aggressiveness towards us as well. 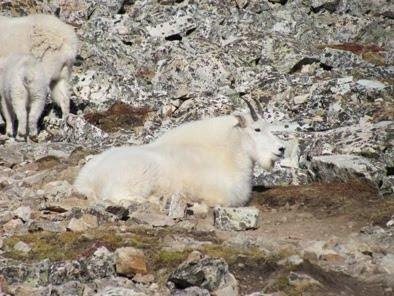 The first indication of this behavior was when the largest male goat laid down on the trail as we approached from below, thus preventing us from proceeding forward. The only reason the ram started moving again was due to another group of hikers ascending the trail below us. This group included a dog.

Although the goats were at least walking again, they stayed on or near the trail, not allowing us to pass. This went on for several minutes until another group of hikers approached from above, prompting the goats to move off the trail. We were finally able to safely pass, and got about a quarter of a mile away from the goats when we decided to take a quick bathroom, food and drink break. Because we were on a fairly narrow ridge, we were just off the trail at this point. 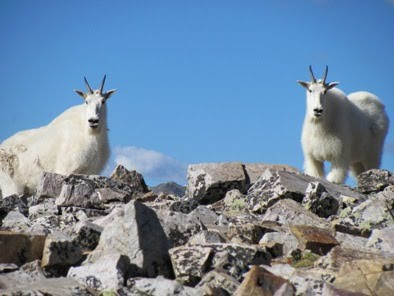 After sitting down on a rock for a couple of minutes we noticed the goats moving again. The large male, the same ram that plopped down on the trail earlier, was making a direct bee line towards us. In a somewhat similar situation as the Olympic incident, I told my wife to get moving as quickly as possible. She was already up the trail when I was finally able to get my backpack together and hurriedly moved out as the goat got to within 75 feet of me. It was the last time we saw the goats.

Interestingly, since the incident in Olympic, park officials there have warned hikers not to urinate on or near the trail because goats are attracted to the salt. Was this the reason the ram approached us?

Obviously I’m not a mountain goat expert, so I don’t know if this behavior is considered normal or aggressive, but I’m going to forward this posting to rangers at the White River National Forest as an FYI.

i love your blog!

I would not want to tangle with one of those things. Sounds like you acted wisely.