The original Appalachian Trail, completed in 1937, extends roughly 2175 miles from Springer Mountain in Georgia, to Mt. Katahdin in Maine. Many don't know this, but in 1995 and 2002, the AT was extended north into Canada. This extension, known as the International Appalachian Trail, treks 1900 miles from Mt. Katahdin all the way to Belle Isle in northern Newfoundland.

This extension of the trail is completely logical as the Appalachian Mountains extend all the way into that part of Canada.

Now comes word that the Europeans have endorsed a project to extend the AT across the Atlantic.

Greenland and Scotland joined the IAT last year, and the IAT hopes to add Belgium, France, Spain, Portugal, Morocco and Algeria next year.

In the not-to-distant future, hikers will be able to continue along the IAT by crossing the Atlantic Ocean by boat or plane, and picking up the trail in Greenland and Iceland, IAT officials said. 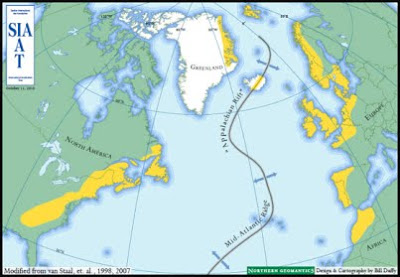 The rationale for the extension is that the mountains that formed the Appalachian range were created millions of years ago when the continental plates of North America and Europe collided. After the continents split apart again, the mountains of eastern Europe and North Africa became known as the Caledonian and Atlas Mountains.

Thus, as the thinking goes, since the multiple mountain ranges were once part of one super range, it follows that the Appalachian Trail should traverse the entire historical range on all three continents.

Once completed, the IAT will become the largest trail network in the world, with multinational membership on three continents.

I'm not really sure what to make of this. With multiple, non-contiguous segments, can you really call it one trail? What does Appalachia mean, or what kind of connection is there for someone hiking the trail in Morroco or Belgium? Does it in anyway diminish the accomplishments of all the people who have completed the original AT?

Has the pursuit of ultra-long distance trails finally jumped the proverbial shark?

Anyone have any thoughts on this - especially those that have completed the original AT?

At least the trail will be passing through some stunningly beautiful territory. Check out the photos on IAT website.


Jeff
HikingintheSmokys.com
Posted by The Smoky Mountain Hiker at 8:51 AM

Are we trying to make the biggest badest longest trail ever? For me the thing that makes the AT special is it's continuity. Go ahead and extend the trail into Canada but Greenland and Europe is to far. I feel you will loose the continuity... and for what? Bragging rights?

the Canada Extension is justifiable however if you have to take boat/air transportation to get there it is no longer a trail.

I agree with Phil, it's not a trail if you have to fly to the next part. I'm not sure what they are trying to accomplish.

Sounds like the Europeans are trying to capitalize on the name for their own purpose. They should create their own.

Yet another effort (& likely expenditure pf limited, primarily donated funds) by the ATC that does not enhance 99.9% of the AT, it's hikers or it's neighbors. Much like the boondoggle to establish a trail in Isreal. What about "extra" education, trail improvement, hiker support, etc on the existing trail first.

I agree with both My life outdoors and Phil. The Canadian extension was a great idea, but if you must stop hiking and catch some sort of transportation to continue the trail, then where is the end of the trail?

It may make good headlines, but it doesn't make much hiking sense.

It's probably way too late to post anything but here's my two cents. I'm a lifelong hiker, but have been saving the AT for when my children leave the nest. I want to thru-hike and can't with the obligations I have now. I traveled extensively throughout Europe before children.
Oranization, expenses and maintenance aside, I think "extending" the trail is a great idea if it doesn't heavily impact wild areas. I find the idea of section-hiking the European version country by country quite compelling. And I like keeping the AT name attached in some way....it gives it the geographical link that the mountains share.