The NPS Digest has this report on their website this morning regarding a rescue on the Alum Cave Trail:

Ranger Brad Griest was heading up the Alum Cave Trail on the afternoon of October 10th to checkout a report of an ill hiker when another hiker told him that a man had fallen on the trail about three miles further on and that he’d sustained a head injury and was complaining of back and neck pain.

Griest reached him about 45 minutes later. The man reported that he had no feeling below his neck, and Griest found an obvious spinal deformity in the upper back and confirmed that the man had no motor or sensory functions below the deformity. He put a cervical collar on him, administered oxygen, managed for spinal trauma, and monitored the man’s vitals until a litter crew comprised of 13 park personnel arrived on scene. 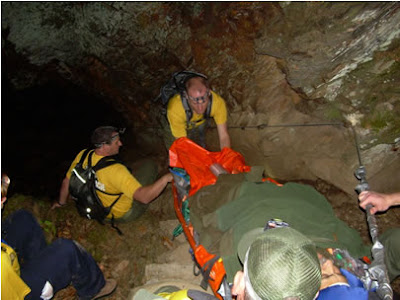 The man was secured to a rigid backboard and placed on a litter. The evacuation was complicated by steep and rocky terrain, deep creek crossings, a short section of technical rope belay, and darkness. The carryout was completed just before 10 p.m.

The man was taken by Gatlinburg FD ambulance to the Sugarlands Visitor Center and flown via Lifestar helicopter to the Level 1 trauma center at University of Tennessee Hospital.

Unfortunately there's no word on what exactly happened, or any follow-up on the victim's condition at this point.


Jeff
HikingintheSmokys.com
Posted by The Smoky Mountain Hiker at 9:18 AM

If anyone is interested in the story and current details, this is a detailed blog dedicated to the injury/recovery of the man in this article. If any of the crew involved were looking at checking up again, they should follow the link.