A lot is being made recently on how Congressional budget cuts could possibly close several national parks around the country. Earlier in the month, Craig Obey, Senior Vice President for the National Parks Conservation Association, published this statement on the NPCA website:


“With looming closures throughout the national park system if scheduled cuts occur in January through the budgetary sequester, we are encouraged to hear President Obama and congressional leaders focusing on the necessity of a balanced approach to addressing the federal deficit. In fact, the first leg of that stool was the Budget Control Act, which already cut significant funds for national parks and other worthwhile programs. It is time for our leaders to bring more balance to the equation.

“If Congress fails to find a solution by January, more than $200 million dollars could be cut from the National Park Service budget, which would likely close visitor centers and campgrounds, and could put as many as 9,000 rangers and other park employees out of a job. These cuts could close as many as 200 park sites across the country.

“According to a recent poll, 92 percent of Americans believe funding for national parks should either remain steady or be increased. Sequester or not, our national parks will face a tough decade ahead. They cannot afford additional cuts after two consecutive years of cuts and a budget in today’s dollars that is 15 percent less than it was a decade ago.

“America’s 398 national parks – from the Statue of Liberty to Yellowstone’s geysers, to the magnificent Grand Canyon – are treasured places that tell the stories of our country’s shared heritage, drawing tourists, and tourist dollars from throughout the world. We call on the President and Congress to find a balanced approach that doesn’t mindlessly cut national parks, which generate more than $30 billion in economic activity each year.”

I'm going to have to take the contrarian view here, and say that these fears are simply overblown. Whenever the idea is floated that parks could be closed due to budget cuts, it conjures up images of the Great Smoky Mountains or Glacier National Park being shut down. In reality, those headlines are referring to national park units that most people have never heard of, such as Alibates Flint Quarries National Monument in Texas, or River Raisin National Battlefield Park in Michigan. The cynical side of me thinks that these assertions are meant to scare people into coughing up more of their tax dollars. 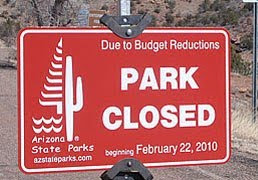 Right now there are 398 national park units, which include national parks, monuments, battlefields, lakeshores, seashores, historic sites, etc. Based on the current budget shortfalls within the National Park Service - even before the proposed cuts - it's pretty obvious that the NPS has over-extended itself. From my perch it's clear that the NPS has taken on responsibilities for far too many properties beyond the scope of their charter.

In my view, this would allow the NPS to concentrate its limited resources on running the parks and monuments that deserve national recognition and preservation, more efficiently.

What are your thoughts?


Jeff
Hiking in the Smokies
Posted by The Smoky Mountain Hiker at 9:34 AM