NPS Digest is reporting this morning that in September of 2011, park rangers discovered an area just below the Blue Ridge Parkway, near the Mt. Mitchell area, where recent digging into an old gem mine was apparent. The area was monitored as digging continued. 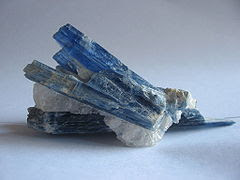 On October 13th and 14th (presumably of this year), two men were found in the site and were arrested for digging and removing kyanite from the pits. Both said that they had visited and dug at the site before, as well as sites on adjacent Forest Service property. A joint investigation is underway with the USFS to identify other individuals who are mining the sites.

Kyanite is a typically blue silicate mineral, commonly found in aluminium-rich sedimentary rock. It's used primarily in refractory and ceramic products, including porcelain plumbing fixtures and dishware. It's also used in electronics, electrical insulators and abrasives.

Jeff
HikingintheSmokys.com
Posted by The Smoky Mountain Hiker at 8:55 AM