Prescribed Burns in Nantahala and Pisgah National Forests in 2013

“Fire has been part of Southern Appalachian forests for thousands of years, and we’ve learned that putting out every fire creates a buildup of forest debris, putting communities at risk and threatening forest health,” said Bail. “Using prescribed burns, we can mimic what would occur naturally and restore native trees and plants like table mountain pine and mountain golden heather, which are fire-tolerant.” 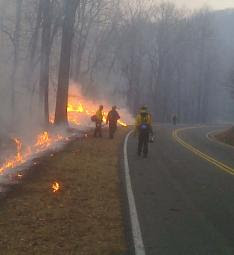 By using low- to medium-intensity prescribed burns, Forest Service employees plan to reduce overgrown vegetation and woody debris that could cause high-intensity wildfires that threaten lives, homes and public infrastructure. Catastrophic wildfires degrade forest health by scorching soils and killing many mature trees and other desirable plant species. Prescribed burning will result in healthier forests that are less congested, more biologically diverse and more resilient to threats from invasive plants and pests, such as southern pine beetle.

All prescribed burns are completed by trained wildand fire professionals in accordance with detailed plans, which include desired weather conditions and other strict safety parameters, as well as modeling to reduce the effects of smoke.

Scientists have found that fire has been a part of western North Carolina’s forests for at least 4,000 years and possibly up to 12,000 years. Lightning strikes ignited many fires, and Native Americans introduced prescribed burning to clear land and for regeneration purposes. European settlers continued the practice. These frequent, low-intensity fires shaped healthy forests in western North Carolina.

The USFS did not provide any information with regards to exact locations or timing concerning the burns.

For more information on prescribed burning in the Nantahala and Pisgah national forests, please click here.


Jeff
Hiking in the Smokies
Posted by The Smoky Mountain Hiker at 4:40 PM