Earlier in the week the N.C Division of Parks and Recreation announced that visitation at North Carolina’s state parks and state recreation areas continued at a record level in 2012, with 14.2 million visits, matching attendance levels set in 2009 and 2011. 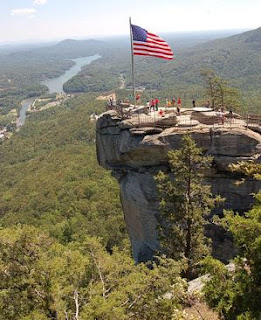 “Continued record attendance demonstrates that our state parks and state recreation areas fulfill a desire of North Carolinians and their visitors for affordable family recreation and a meaningful outdoor experience,” said Lewis Ledford, state parks director. “A direct result of this high visitation is the strong contributions that state parks make to North Carolina’s tourism economy as well as the economies of local communities.”

A 2008 economic study revealed that travelers spend an average $23.56 a day to enjoy the state parks. The analysis by North Carolina State University’s Department of Parks, Recreation and Tourism Management estimated the state parks system’s total annual economic impact at more than $400 million. The complete study can be found here.

During the past 25 years, the state parks system has seen a dramatic 87 percent increase in visitation. In 1987, 7.6 million people visited state parks and state recreation areas.

Several state parks that reported higher attendance in 2012 were able to offer improvements and new amenities to visitors. A new 7,100-square-foot visitor center and related facilities were dedicated at Gorges State Park, and the park experienced a 22 percent increase in visitation. Improvements in access facilities at Chimney Rock State Park contributed to a 36 percent jump in attendance, while William B. Umstead State Park in Wake County, which improved parking and a popular trailhead area, recorded visitation up 33 percent.

The state parks system manages more than 217,000 acres within state parks, state recreation areas and a system of state natural areas dedicated to conservation of rare resources. Through its New Parks for a New Century initiative, six new state parks have been added to the system since 2003.