In Defense of the Smokies Decision to Euthanize the Cataloochee Elk

I'm always amazed by the vitriol that some express after a national park has to put an animal down. I'm even more amazed/chagrined by those who place more value on the lives of animals over human beings. The recent incident involving a photographer and an elk in Cataloochee, now made famous by a viral video, is no different. For a flavor of some of the comments and thought processes of some people, simply take a look at the comment section of the Great Smoky Mountains Facebook posting on November 18th.

In my view, the Great Smoky Mountains absolutely made the right decision. It appears that many commentators failed to read this key passage in the park's posting:


Between September and last week, park biologists aggressively hazed this elk 28 times to discourage it from approaching the road and visitors. They captured, sedated, tagged, and re-released it on site. This technique has proven to be much more successful than relocation because it causes the animal to associate the place and people with an unpleasant experience. The elk did not respond to attempts by biologists to change its behavior. The behavior that it learned from park visitors who had given it food had been too strongly ingrained.

By initiating physical contact with a visitor, the elk displayed an unacceptable risk to human safety. After becoming food conditioned, the elk did not respond to any attempts to keep it out of the area and away from humans. When wildlife exhibits this behavior it often escalates to more aggressive behavior creating a dangerous situation for visitors.

I think it's pretty obvious that Great Smoky Mountain officials did everything they could to keep this elk alive. Pointing the finger at the park in this incident is completely misdirected. Some have also placed blame on the photographer that sparred with the spike elk. From my point of view there's no evidence that he did anything to encourage the elk to "misbehave" - at least from the video footage that's been made public. The real question people should be asking is why no one came to the photographer's aid? There was at least one person in a car behind the photographer, as well as the videographer, that could've chased that elk away, or at least distracted him. That photographer was literally one second away from having an antler sever his jugular vein. 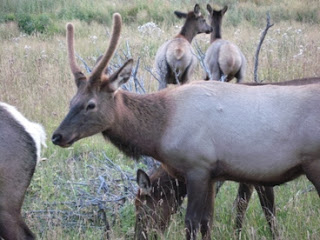 The real problem, however, is with people feeding animals, or with Nat Geo-wannabees approaching animals with smart phone cameras so that they can get a better shot.

I just finished reading a book called Shattered Air. It's an account of a horrific thunderstorm that passed through Yosemite and Sequoia National Parks in 1985, which killed 3 people and injured 3 others as a result of lightning strikes. Although the park feared that the family of one of those victims was going to sue Yosemite, the family decided not to given the culpability of the hikers involved in this particular situation. However, the book does state that plaintiffs won damages totaling $1.7 million when lightning strikes killed one person and injured another on Mt. Whitney in 1990. They won because the park failed to install warning signs that hikers could be endangered by lightning.

That case isn't an outlier. An Idaho family is currently suing the U.S. Forest Service for more than $1 million after a dead tree fell and injured their son while camping in Boise National Forest. Also, several victims from the 2012 Hantavirus outbreak in Yosemite are suing that park. There are many other examples.

Clearly, had that elk injured or killed someone there's a very strong chance that the Great Smoky Mountains would've been held liable in a court of law.

For those who still think that the elk should've been saved, let me ask this question: What would your thoughts be if that same elk trampled, gored or attacked an innocent hiker, camper or child - especially if it was a family member, or maybe even you? I bet most of those expressing outrage today would be searching Google for a lawyer the very next day.

If you really want to stop needless wildlife deaths I would encourage people to speak up when they see park visitors acting inappropriately around wildlife. You could probably come across hundreds of examples in Cades Cove on almost any day.

In case you missed the now famous video, here it is:

I subscribe to this blog because I love the Smoky Mountains, Cades Cove most particularly. I do not get to visit often but it is my favorite place in the whole world. Thank you for keeping us all updated and giving the wise advice of respectfully viewing the wildlife. The loss of the young elk is sad but had to be done. I agree with you in all aspects regarding this sad situation. Sometimes you can't get the stupid out of people. Enough said.

Well said Jeff. It's important for folks to know the whole story and not just spout off with a knee-jerk reaction.

Well said! Thanks for pointing out the number of costly lawsuits visitors are filing against the NPS for adverse experiences most of us would attribute to poor judgement on the part of humans or to the inherent risks of being out in the natural world. National Park Service employees walk a very fine line between protecting the park and it's resources and protecting people. It's a tough, sometimes thankless job.

Randy and Kristina - thanks for the comments!

Well said! The elk was definitely looking for food! My dog displays similar actions when she's out of food - fortunately for me she's a heck of a lot smaller and doesn't have antlers. I can't understand why it took someone so long to come to the photographers aid. It was obvious to me that the elk was being aggressive. People see the videos and think "oh poor animal" but they don't get the full story. NPS had no other options - they tried everything. I totally respect wildlife because they are wild and behavior can't be predicted. People don't stop and realize how dangerous a situation could become in the blink of an eye - like with those antlers so near to jugular veins in the neck! There are so many stupid people out there - see them every year at Cades Cove. Saw them in Yellowstone when I was out there. Thank you!

Completely agree, Jeff. A lot of the angry comments came from folks who have never stepped foot in Cataloochee and obviously do not know that photographers are allowed to shoot from the road. Some people like to get worked up for a cause despite having little knowledge of certain situations!

Totally agree with the park's decision. It's frustrating when people think wildlife are like pets. They don't think about the consequences. As one commenter mentioned, losing the the elk was indeed sad. But it was that against injuring and most probably losing human lives in the future.