Forest health officials with the U.S. Forest Service have discovered declining ash trees due to infestation by the emerald ash borer (EAB) whose presence was confirmed on the Appalachian Ranger District of the Pisgah National Forest and on private lands along the French Broad River from the Tennessee state line to Marshall, NC. 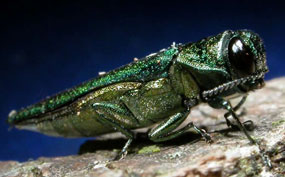 Decline and death of ash from EAB occurs in a relatively short period of time (one to two years). Ash tend to become brittle very soon after they are killed leading to mid stem failures of trees in the infested area likely beginning within the next year. Hazard tree mitigation for EAB-killed ash trees should begin as soon as possible after the tree dies. Hazard tree migration for EAB affected ash is generally much safer when trees are removed as they die as opposed to when they reach full mortality and become very unstable.

The U.S. Forest Service will focus hazard mitigation work on ash trees located in developed recreation areas like campgrounds and picnic areas though affected trees will be present throughout the forest. Forest visitors should be cautious along roads and trails as the ash mortality is likely to be high in affected areas across the district. Check your suroundings before placing your tent or resting under a tree canopy. Avoid dense patches of dead trees. Be vigilant and look up for trees with broken limbs or tops as you drive forest roads or hike forest trails especially in windy conditions. Trees and branches can fall at anytime but are much more likely during wind events or following ice or snowstorms.

Adult EAB beetles are metallic green, about 1/2-inch long, and attack only ash trees leaving a D-shaped hole when they emerge from the tree in spring. Individual trees can be saved if they are chemically treated before decline symptoms are present. More information is available at www.emeraldashborer.info including a bulletin describing the signs and symptoms of EAB and an insecticide fact sheet.