Are private, illegal trails being cut in Great Smoky Mountains National Park? That is an allegation being leveled by Southern Forest Watch, and is the subject of a recent article published on the National Parks Traveler website. According to the NPT article:


"Sometime in recent years two trails running more than a mile-and-a-half were cut into the backcountry of Great Smoky Mountains National Park, allegedly for the use of a private resort that borders the park, according to court documents.

When contacted by the Traveler, park officials declined to discuss the trails, or even acknowledge their existence, as their presence has been raised in litigation. However, the "Boundary Trail" and "Blair Gap Trail" depicted on a trail map purportedly handed out by the Blackberry Farm Resort do not match any trails on the park's official trail map. Together they run along the park's western boundary roughly from the Beard Cane Trail to the Cane Creek Trail.

The existence of the trails surfaced in connection with a lawsuit brought against the Park Service by Southern Forest Watch, a nonprofit group organized to overturn the park's $4 per night fee charged on backcountry travelers. Though not central to the fight over the backcountry reservation system, the group pointed to the "illegal trail system" as part of a pattern of "political patronage" that former park Superintendent Dale Ditmanson oversaw. Mr. Ditmanson, who instituted the backcountry fee system in 2013, retired from the Park Service earlier this year."

The following is a map that purportedly came from the Blackberry Farm Resort that shows two "private" trails within the park, noted on the map as the Boundary Trail and the Blair Gap Trail: 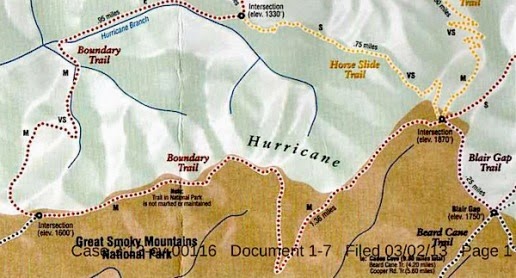 Here's what this area of the park looks like according to the most recent Park map: 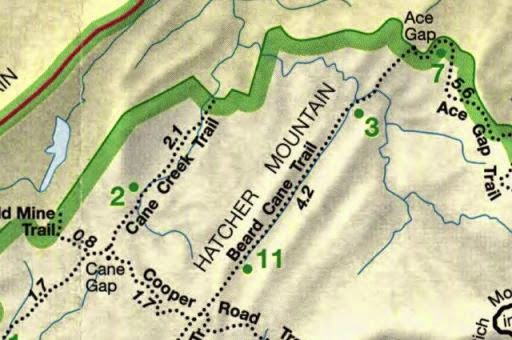 However, after doing a little research on the Library of Congress's website, I found evidence that may show the existence of these two trails going back several decades. On it's website, the LOC has online versions of Great Smoky Mountains National Park maps dating back to 1926. The following is the official Park map from 1950, which appears to show the existence of the two trails in question:

By 1980, however, the park was no longer maintaining either of these two trails. Though marked on the map, the legend indicates that the trails were indeed "non-maintained" by this point: 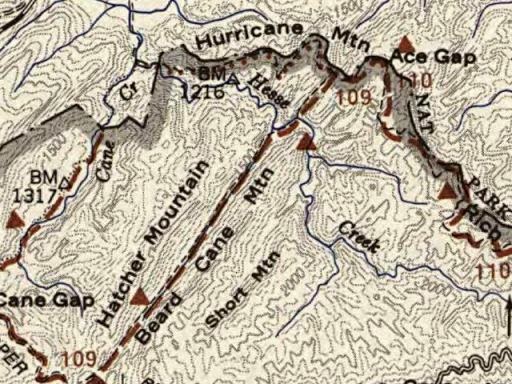 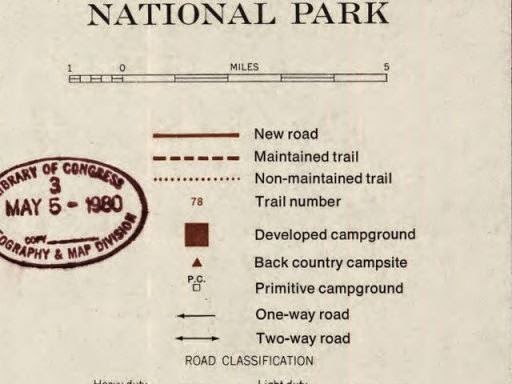 One of the persons offering comments at the end of the NPT article stated that:


"The boundary trail and blair gap trail is from the CCC days where they attempted to make an entire trail around the park boundary. It was more than likely routed from an old cherokee route. There are many trails in the park that are from ancient cherokee routes. They usually followed drainage's or mountain ridges, that were used for hunting and gathering. Portions of the AT is an example of a reclaimed cherokee trail.

This extensive boundary trail is part of a series of trails (cove mountain, little greenbrier, roundtop, chestnut top, scott mountain, rich mountain and ace gap) and these trails are maintained by the park and are inside the park boundary."

This information is supported by a document I found that discusses trail erosion patterns in the Smokies. This environmental research document was written by NPS employees, and was published sometime in the late 1970s. It discusses the Boundary Trail quite a bit.

Based on my limited research, this trail appears to have existed for many decades, if not centuries. However, as to whether or not the Blackberry Farm Resort has been maintaining the trail for its own guests, I have no idea to the answer of that question. The NPT article does point out that John Quillen of the Southern Forest Watch:


"came upon a trail of trees that had been chainsawed down. He and some friends also heard a chainsaw at work, and encountered riders on two all-terrain vehicles who allegedly claimed they had come from Blackberry Farm."

I assume we'll all find out the truth of this matter once the Southern Forest Watch lawsuit against the NPS goes to trial.