Great Smoky Mountains National Park officials are reporting that a small wildfire is burning between U.S. 129 and the shores of Calderwood and Chilhowee Lakes - roughly 7 miles west of Gregory Bald. 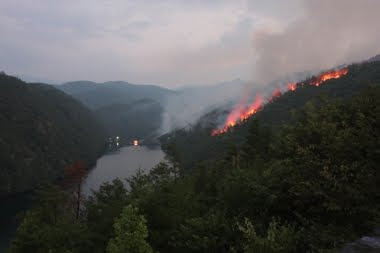 The fire is believed to have been started by a lightning strike on August 17 on land owned by Tapoco, but was first detected and confirmed on August 22. It has spread slowly onto national park land. Firefighters are pursuing a confine and contain suppression strategy.

According to the InciWeb Incident Information System website, the fire has grown to 160 acres and is currently 25% contained.

Now known as the Calderwood Fire, 27 fire management personnel from the National Park and the Tennessee Department of Forestry are jointly managing the low-intensity wildfire.

The estimated containment date right now is September 9, 2010. Additionally, no park trails are closed, but motorists are advised to exercise caution driving on U.S. 129 due to firefighters working adjacent to roadways and the potential for reduced visibility.

Jeff
HikingintheSmokys.com
Posted by The Smoky Mountain Hiker at 9:55 AM